Editor’s Note
Kookmin University is known for a lot of things, and one of the many, is automotive Engineering. The Department of Automotive Engineering at our school has a long history of over twenty years from when it was first established in 1992, for the purpose of training students to excel in the automobile industry. With that said, the department’s special purpose of nurturing students to become experts in automotive engineering is definitely fulfilling its goal and mission. This is exemplified by KORA which is one of the clubs within the Department of Automotive Engineering. KORA or KOOKMIN RACING, is undoubtedly one of the best clubs that does automotive engineering, and their skills already have a great reputation which is not only recognized on our campus, but worldwide. Behind this impressive club, there are the members who work hard to create and keep up the reputation that they receive, and the Kookmin Review met with four members to hear more about KORA and what they are all about.

KORA, as mentioned above, is a club consisting of students from the College of Automotive Engineering. With pure passion as their driving force, they design and manufacture cars by hand, to participate in competitions. On top of competing, the club also conducts debates among themselves and study together to obtain a deeper knowledge of automotive engineering. As for the size of the club, they hold about 110 members and also have around 100 OB members which refers to members who have already graduated. Furthermore, the current members and the OB members have a tight bond with each other where they have a sports day once a year and sometimes the OB members host seminars for the members. With the high reputation of KORA, the club is very popular in the department and they get lots of interest from the freshmen at the start of the school year. Hence, the club gets lots of participants and the club lets in anyone who wants to join, however a lot of the first years drop out after they join since the club can be pretty overwhelming. Furthermore, for the competitions that KORA participates in, FSAE that is held in the U.S is the top priority for the club and is the one that the members look forward to the most. However, the club does not neglect to participate in domestic competitions as well. To name a few of the competitions, in March, the club competed in the Shell Eco Marathon which was held in Singapore, landing in the fourth place in the Battery area. Furthermore, the club participated in the highly prestigious FSAE competition in May with the impressive result of ranking 11th among 120 teams and ranking the first among Asian countries. Since the FSAE competition is the most important, the members utilize the lower prioritized competitions to test their product and this time they tested and succeeded in utilizing the intricate skill of making their cars’ bodies out of carbon monocoque which was made by Vice President Min-Ki Lee himself. Overall for the future of KOOKMIN RACING, the president told us that through further experiments and research, KORA will maintain the title of being the best in the whole of Korea and they will strive to top their record of ranking fourth place in the FSAE competition in 2015, furthering KORA and Kookmin University’s high reputation.

What is good about KORA…
June-Hyung Kim (President)
Even though you might lack knowledge or experience, if you have passion and perseverance, KORA is definitely the number one club to create the best cars since we have excellent know-how and infrastructure to support the manufacturing and designing of cars.

Ji-Yoon Oh
I think the best thing about KORA is that we get to learn what really happens in engineering which we cannot learn just from lectures. As for me, I was able to learn the overall process of automotive engineering ‘hands-on’, the steps of designing, interpreting, manufacturing and testing. In addition, through the verification of the dynamic test and the evaluation of the process of the reasonableness of the design, I was able to learn a lot that we cannot learn in the classroom.

Eun-Gyun Heo
By leading a group lifestyle, you are able to experience and be more comfortable with acting as a group member and not just as an individual which prepares you for the environment when you enter into the actual industry which often requires you to act in groups. In addition, when you go into automotive engineering, you mostly start off doing designs, but by having experience of the manufacturing process, you are able to create designs that are more realistic, taking into account the actual manufacturing of the design.

Min-Ki Lee (Vice president)
Overall I was able to learn the practical process of the design, manufacturing and the interpretation of programs by participating in all of the competitions. In addition, from those competitions it really helped that I was able to get a clear and objective assessment of my abilities. Also even though my individual life is largely limited because all of the KORA activities require teamwork, it helps to get used to doing team projects because team work is really important when you actually step into the industry. In addition, through the FSAE competition, you get to broaden your vision and learn and experience more, by seeing what other university students from all around the world are doing.

The hardest part…
June-Hyung Kim (President)
When we participate in competitions, we usually participate in teams. Therefore about ten or twelve people would be in one team and the team would consist of members who are in different grades and who are in different age groups. With that said, when we start off preparing for competitions, we do not get to leave campus all that much and basically live on campus. This leads to lots and lots of time being spent with your team members which often results in clashes between the members. Therefore it is sometimes really difficult to manage conflicts and clashes of opinion amongst the members which happens frequently since all of them are really passionate and enthusiastic in what they do. As for being president, the toughest part about my role is being the ‘middle man’ since I am the one who has to listen to, and gather everyone’s opinions and also act as the link between the club and the school.

Ji-Yoon Oh
I think the hardest part is when I let my team down or when I am responsible for negatively affecting the team. When we participated in the Shell Eco Marathon which was held in Singapore, our team had a testing session for our car and the piece from the car that I had developed broke during the testing so our schedule for test racing et cetera had to be set back. At that time I felt really bad and responsible since the part that I made was the direct cause of the delay for my whole team. So overall, letting my team down was the toughest thing that I had to deal with.

Eun-Gyun Heo
In a nutshell, the hardest part of being a member of KORA for me, is not having enough time to do anything except what is KORA-related. I personally like going out and having fun with my friends or just having time for myself. However, being so busy with KORA, I find it difficult to have any downtime for myself which is pretty tough. One of my friends even jokingly asked me if I went back to the military which basically sums up just how hectic I get with the club.

Min-Ki Lee (Vice president)
I think the toughest parts about being a member includes all of what the others said about opinion conflicts and not being able take any time for oneself. To add to that, in my case, I am exempt from going to the military so I have been a part of KORA for a long time, with 2017 being my fourth year. Hence I mostly take leading roles when I am in teams but the problem is that most of the time I have team members who are older than I am and I feel really bad when I have to ask them to do something. I have a tough time overall regarding how to handle situations where I am the leader but my members are older than I am. 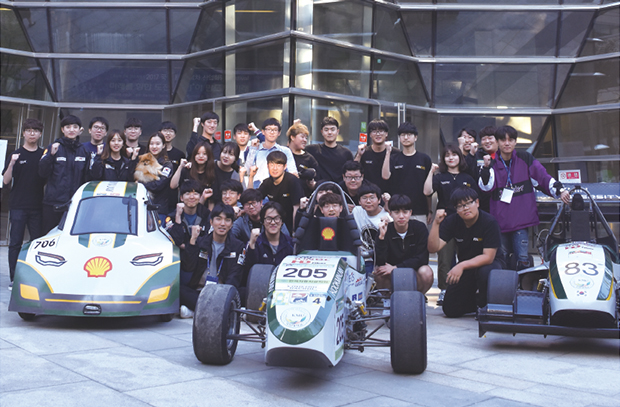