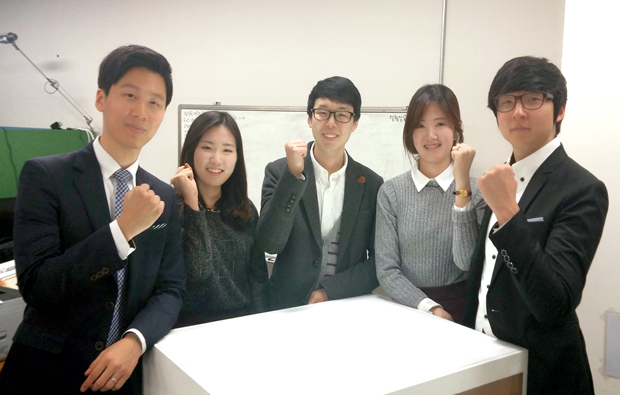 Welcoming its 3rd event, the Engineering Education Festival is the biggest engineering festival that aims to share and expand the innovative achievement of engineering education, inspire the pride of engineers, and suggest the vision for the future along with the developmental direction of engineering education. With the theme of ‘Engineering, the Happy Prism That Colors the World,’ it was held in Ilsan KINTEX from November 27th (Thur.) to 28th (Fri.).

Dong-min Hyeon of the Singibanggi Team that won the Prime Minister’s Award with “Art Box” project was interviewed. 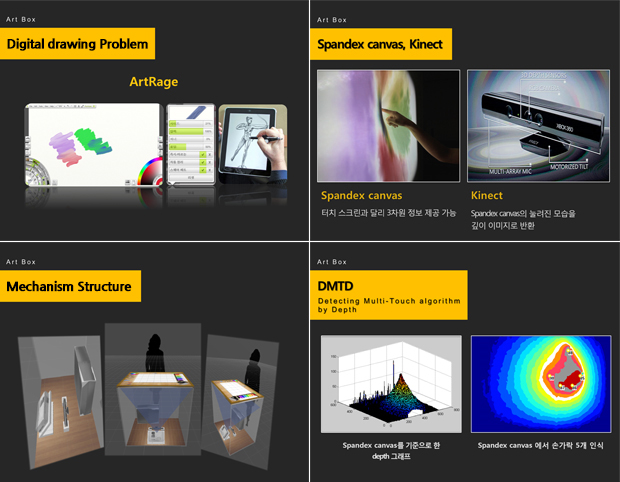 Q. Briefly explain about the Art Box project.
In the touch-based smartphone and tablet, it is inconvenient to access the menu every time to change the size or density of a brush. Also when it comes to expressing an image in a small screen, the sense of immersion is decreased. In order to solve such issues, the ‘Art Box’ uses an elastic fabric called Spandex Canvas sized 80x60 (cm). When a user presses the Spandex Canvas, the depth camera recognizes the degree of pressed depth and coordinates and then the drawing module draws an image. By intuitively changing the size and density of the brush based on depth information, it frees the user from the burden of accessing the menu every time. In addition, the internally drawn image can be printed to the Spandex Canvas so eventually, the user can have the effect as if drawing on the Spandex Canvas.

Q. What made you receive more favorable evaluation compared to other teams?
The uniqueness of Art Box is derived from creativity and completeness. There haven’t been projects that provide practical drawing environment like the Art Box. In other words, we were highly evaluated in terms of creativity by making something out of nothing.

We integrated the camera that recognized the user’s pressing, in addition to an image-processing computer and a beam projector that showed the outcome to the user through the ‘Art Box.’ The users can utilize it as a painting tool without considering the inner composition. Also, there are guidelines for those who are using the Art Box for the first time and there is also a printing function to print out an image. Such completeness was the key to obtaining good score in the evaluation.

Q. From where did you get the idea?
While having an idea meeting with the team members to come up with a fun theme, we got to know expression using Spandex Canvas in the field of arts. At that time, Spandex Canvas provided the performance that spreads ink from the pressed point. We thought that it was possible to enable additional functions to the nature of the elastic Spandex Canvas by using pressed depth. In order to apply this, we came up with many ideas. One of these ideas is the ink-and-wash painting that changes the density and size of brush depending on brush pressing force. From this, we thought of the painting environment using the Spandex Canvas.

Q. What are the things to be desired while promoting this project and points to be improved?
Most functions were realized but there are several things we want to improve. First is to add animation effect when clicking the button to increase the degree of completion. Also, we want to enable the representation of more accurate image production through a finer recognition of touch points.

Q. I wonder how you were able to deal with the difficulty in project implementation.
Since this project required hardware, we had to prepare a depth camera, beam projector, and work box. Also, we had to adjust the exact position of each device so a lot of time had to be invested here as well as in the program development. For this, the members got together and decided after conducting several times of simulation. In addition, a kind of support fixture was produced to prevent manual adjustment of device position so after this, it was possible to easily set the device position.

The Art Box of the Singibanggi Team recently received the Grand Prize in the International Capstone Design Contest on Renewable Energy Technology 2014 and Creative Design Competition of the Engineering Education Center.

According to the Ministry of Education, 20 thousand university students from about 90 engineering colleges as well as students, teachers, and parents from middle and high schools have participated through twice of its operation and as it gained interest from university students and persons interested in international engineering education, this event has been settled as a global engineering festival. A person interested in the Ministry of Education said, “It will serve as a momentum to provide a milestone for innovative engineering education and by transcending as a festival for engineers, it accelerated the start of cultivating happy designers who will open up the new era of hope.”