Suggested the image of a reliable journalist, awards ceremony on December 16th 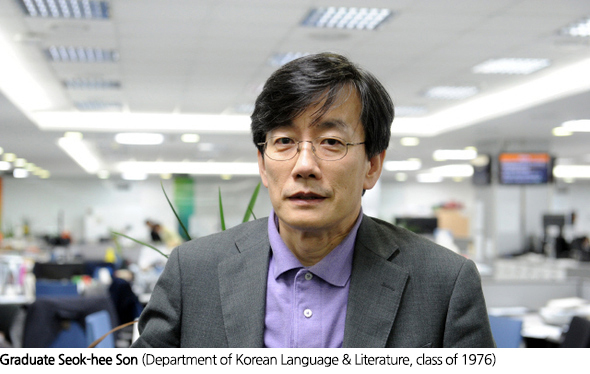 The graduate Seok-hee Son, the CEO of press bureau at cable channel JTBC, was selected as the winner of the ‘13th Song Kun-ho Prize.’ ‘Song Kun-ho Prize’ was made by the Cheongam Press Foundation and Hankyoreh Newspaper to commemorate the journalism spirit of the late Cheongam Kun-ho Song. On the 8th, the Screening Committee of Song Kun-ho Prize explained, “He maintained the dignity of journalists with consistent efforts and strict conduct. Also, his attitude that devotes himself for the broadcasting culture satisfies the spirit of Master Kun-ho Song.”

Since he started his career as announcer at

He moved to the cable channel JTBC as the CEO of press bureau and took the position of the main anchor of the news. JTBC news relatively delivered balanced contents that were not properly dealt in public broadcasting, such as National Intelligence Service's intervention in the presidential election, fabrication of spy evidence, strike of the Korail union, and Sewol Ferry sinking. Because of this, there is a critic that suspected crack in the frame called ‘total TV programming channel provided by Jo-Jung-Dong.’ After about a year since his joining to JTBC, its reliability entered the higher rank. The Screening Committee said, “Broadcast is the outcome made by many service providers but we admit that ‘the broadcaster Seok-hee Son’ made great contribution to the increase of dignity and stature of programs.”

CEO Son expressed, “Although I was a student at the ‘publication of blank advertisements’ in

He cited the Sewol Ferry sinking as an example and said, “The society became polarized even in the most humanitarian issues while the political circle and the press were suspected to use and promote that. It is like the game rules dominate things as if extremism brings benefit.” He added, “(In the course of reporting the Sewol Ferry sinking) we tried to reject pursuing interest that implemented extremism.”

The student startup team of Kookmin University, won the best award in the Global Student Start…