The result of the thesis is to open the possibility of applying MoS2 crystals to devices such as ultra definition, lower power consumption, large display, touch screen panel, and solar batteries.
If this ideabecomes commercialized, power consumption could be reduced to less than that of an LED TV and thinner and more vivid display devicescould be produced.

Now a material studyto develop a product which hasa two-dimensional function is active worldwide. Particularlygrapheme, which was found in 2004 and won a Nobel Prize in 2010, is the main material, but it has limitations as a transistor because grapheme is a semimetal.

MoS2 crystal, which is the main material of the thesis, is a two-dimensional semiconductor like grapheme. Unlike grapheme, MoS2 crystals are in the limelight as a thenext grapheme due to their outstanding quality, but the 'single layer’ transistor based on MoS2 that has most commonly been researched, has a difficulty in being produced because of a complicated process. 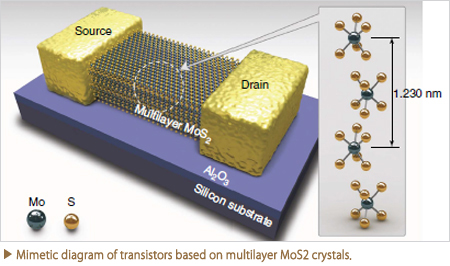 In addition, this thesis explains previous transistors based on MoS2 crystals as a primarytheoretical explanation so it could be a big opportunityto connect the fields of study.

Researchers from Kookmin University, Kyung HeeUniversity, Sungkyunkwan University, Samsung Advanced Institute of Technology, and the University of Notre Damehave participated in the thesis.