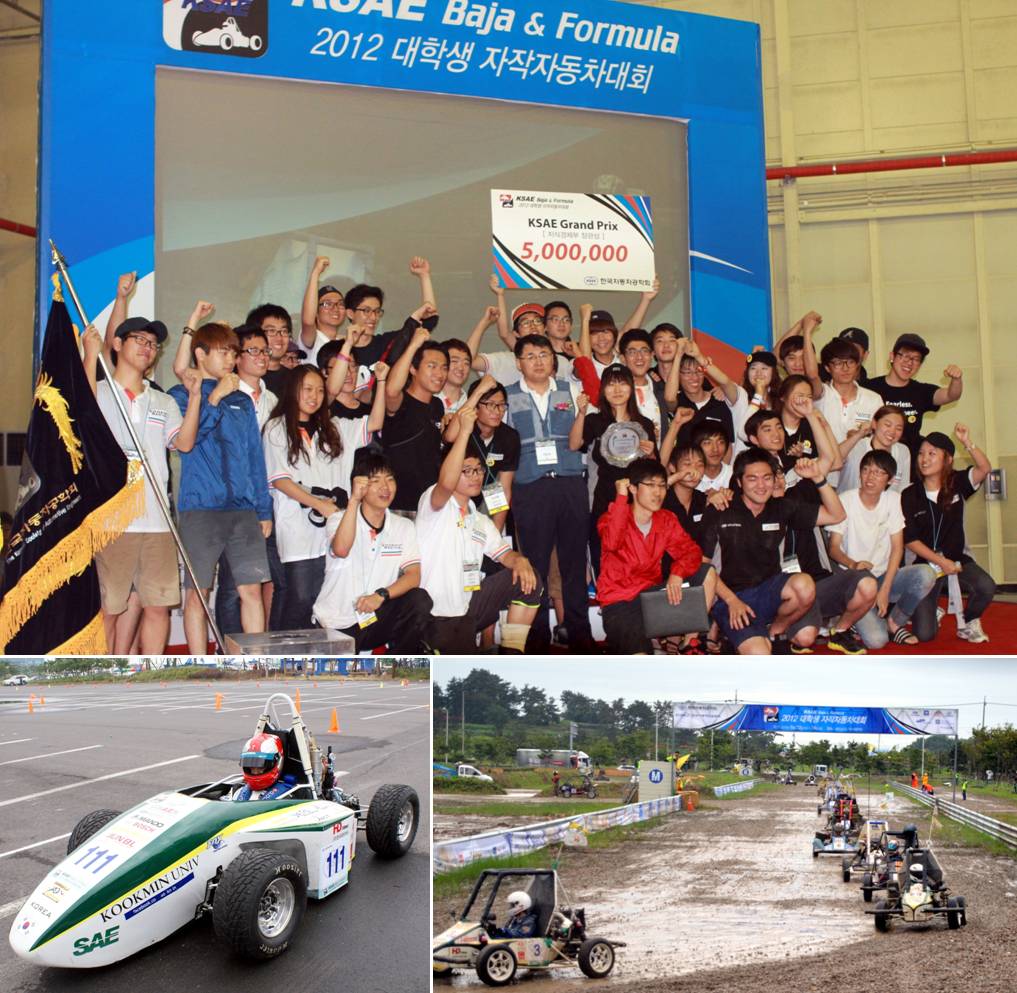 Our university car team ‘Kookmin Racing’ won the overall prize of the ‘2012 KSAE Baja & Formula’championship,which was awarded by The Ministry of Knowledge Economy at SaemanguemGunsanMotor Race Course. In this competition organized by the Korea Automobile Manufacturers Association andsponsored by Hyundai, Kia, and GM Korea, the Kookmin Racing team took 1st place and became the ‘KSAE Grand Prix’championinboth the semi final and the final,out of 139 universities. They also got the ‘Acceleration’ championship two years in a row, 1st prize in the‘Autocross’, gold prize for‘Production & Design’, and the ‘Excellent Guiding Coach’ prize in this competition.
Team leader Byeon, Ji-soosaid:“Our team members stuck to this to prepare for the competition during summer vacation sleeping only 4 hours a day. It feels like dream that we won this championship as we designed and made the car by ourselves. We will compete again next year with new technology and a newly designed car. We appreciated the university president and professors who supported and encouraged us.”Professor Lee, Sung-wook and Professor Choi, Woong-chul who got the ‘Excellent Guiding Coach’ prize said:“Our students worked on the car night and day and their passion is to enter a real Grand Prix. That passion made them challenge constantly with new designs and technology, and not settle for the car made last year. Through many tests, trials and errors, this championship car was created. I am really happy and proud of them as a professor.”
The Kookmin Racing team was 10th in world ranking (1st place in Asia) at the World FSAE, beating out universities in the world with great car power such as the United States, Germany, and Japan.
FSAE has been sponsored by the Korea Automobile Manufacturers Association and the Korean Society of Automotive Engineers since 2007. It is a kind of dream competition to students who are majoring in car engineering in that it provides students an opportunity to make and design the car themselves, and also helps to cultivate people of talent in car engineering through racing sports. Kookmin University is scheduled to hold an event inviting poor children in the neighborhood for a car test drive in a Kookmin Racking car and an unmanned automobile made by the Unmanned Automobile Robot Research Center. Following that, the championshipcar will be put on display and kept at the exhibit hall in university.

Alumnus Cho, Chang-hyun donates a ‘light’ to his alma mater