Alumnus Cho, Chang-hyun donates a ‘light’ to his alma mater 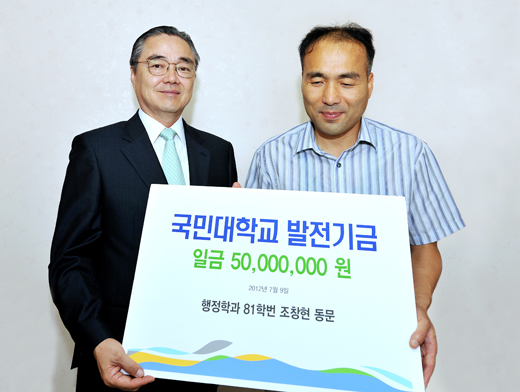 Alumnus Cho, Chang-hyun donates a ‘light’ to his alma mater
An alumnus of our university, Mr. Cho, Chang-hyun (Public Administration, ‘81) donated a development fund of 50 million won to Kookmin on July 22, 2012.
A few days after his donation, he sent a letter to our university describing that “this is an inheritance received from my father who passed away not long ago and I could not think of spending this money, which was a life saving my parents gathered. Although this is a small amount, I hope it to be used meaningfully.”
President Yu Ji Soo visited Mr. Cho who lives in Cheongju, Chungbuk Province on July 9 after hearing the heartwarming news. President Yoo handed a certificate of appreciation and mentioned that “Your valuable donation will be named as the Cho, Chang-hyun Scholarship for our students, and I will make this opportunity as a new beginning of raising development funds to help our university.”
Mr. Cho, Chang-hyun entered our university’s Department of Public Administration in 1981. His vision was good when he graduated in 1985. However, he began to lose his sight gradually during working. He is currently visually impaired and lives in Cheongju, Chungbuk Province by himself.