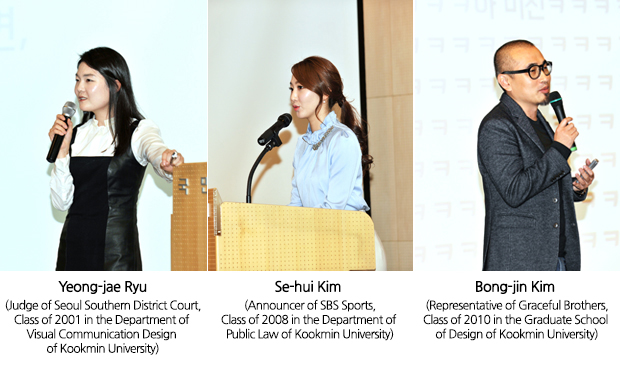 The ‘Little more special lecture on Thursday’ that was provided in celebration of its 20th anniversary was held at 3p.m. on the 27th in the Academic Seminal Hall on the 1st floor of the Administration Hall. Unlike the existing Thursday special lecture that invited an outside renowned celebrity, three graduates from Kookmin University were invited to have a more special time with their juniors.

The special lecture that was hosted by the announcer Se-hui Kim of SBS Sports (graduate of Public Law) continued for over 3 hours beyond the scheduled time in the order of lectures by Representative Bong-jin Kim of Graceful Brothers (Class of 2010 in the Graduate School of Design) who was creating the unparalleled level of delivery service in Korea and Judge Yeong-jae Ryu of Seoul Southern District Court (Class of 2001 in the Department of Visual Communication Design), Talk Concert, and photo time. 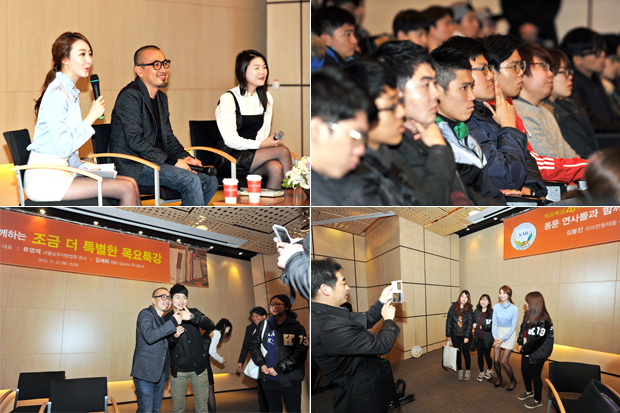 Representative Bong-jin Kim of Graceful Brothers was the first to give a lecture and as the leader of the company that was highlighted with kitsch expression, he continued his speech themed with ‘creative confidence.’ Especially, he created humorous atmosphere using subjects and expressions that could be shared with his juniors in their 20s. Judge Yeong-jae Ryu who gave the second lecture was highly talked about among those who prepared for and passed the judicial examination being called to ‘the visual communication design major of Kookmin University’ as he started his career in the juridical circle, not in the design industry. He honestly and boldly talked about his life’s events when choosing his path having a theme of ‘To believe myself’ and it aroused sympathy from the audience. And the announcer Se-hui Kim of SBS Sports showed her program and delivered the vivid sense of realism as a new announcer.

Then, the three lecturers came on stage and had a free talking time with the students. The talk concert that began with a male student’s love towards the announcer Se-hui Kim was filled with stories that were possible to be shared between juniors and seniors such as serious counseling on students’ future direction that was different from their major field of study, voice of the real sites on law school and precedents, and further business plan of Representative Bong-jin Kim. After the talk concert, the juniors took a picture with their seniors and listened to the issues that were not raised during the session. With this, the Thursday special lecture in celebration of the 20th anniversary was ended.

In celebration of this event, the book ‘The Very Special Stories Meeting on Thursdays’ that is the memorial book published for the 20th anniversary of the Thursday special lecture was presented to the participating students and the guest lecturers. This book includes stories of the 40 representative lecturers.