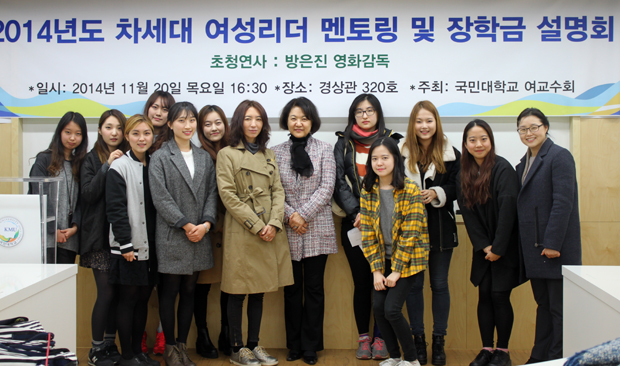 The Next-generation Female Leader Mentoring and scholarship presentation were held in Room 320 in the College of Economics and Business building on November 20th (Thur.). The event was commenced with a special lecture of actress and film director Eun-jin Bang, who was from the class of 1985 in the Department of Fashion Design at the Kookmin University’s College of Design. After the lecture, the person who received the Next-generation Female Leader Scholarship last year shared on how to apply for the scholarship as well as the secrets for being selected, aiming to help the female students who dreamt of becoming the next-generation leaders. With the Q&A session, the students were able to know the preparations necessary for the program. 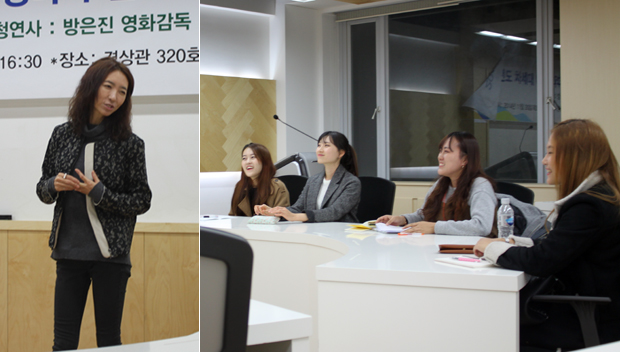 Director Bang dreamt of becoming an actress as she took part in the theater club in the university. After graduation, she worked in a company and then developed her career in a theater. Eventually, she settled as a film director. Through the special lecture, director Bang said, “The students today tend to have general and common dreams by hiding uniqueness possessed within themselves” and she asked the students to find more special and significant characteristics and dreams. She emphasized the importance of pride and confidence by saying, “It is ridiculous to think that you cannot become a leader because you are passive.” She advised to be courageous as anyone could be a leader because we all had unique personality and foundation.

She also talked about some stories regarding the film industry. She said, “Women are stronger than men.” She said that filming demanded physical strength and more than half of the people working in the film industry were women. She emphasized that women could emotionally and physically endure hardships well and they can do anything successfully.

Lastly, she shared her motto, “You become what you believe” to a student who was worried about her low self-esteem by quoting the words of Oprah Winfrey and advised not to limit one’s self with negative thinking as our beliefs become our reality. For director Bang, ‘making a masterpiece film’ was her life’s dream.