KMU’s reputation in university development, It is all right to be confident of our school 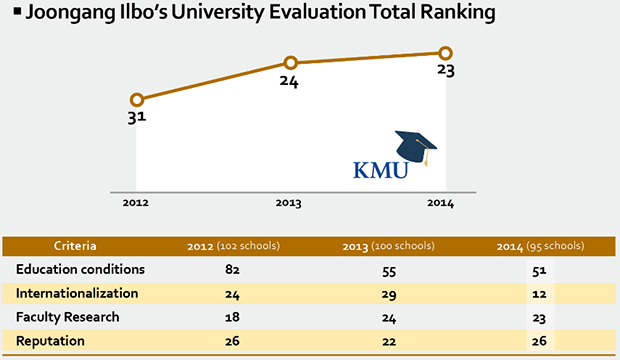 A positive reputation is likely to precede Kookmin University for recent developments in the school. Not just Kookminians but also other groups of people are having positive images about the school. Customary for this season, JoongAng Ilbo, one of the major Korean newspaper media, posted articles on its evaluation of universities in Korea. The evaluation is a controversial matter that triggers academic elitism, stereotypes colleges and aggravates conflicts in the society. Therefore, a substantial number of Korean universities’ students raised voices against this society-threatening evaluation by the press. Fortunately, there is good news for Kookminians. Surprisingly, this is not related to KMU’s achievements for reaching a higher ranking than last year. Regardless of the university evaluation results which have been going up for the last 3 years, KMU has been known as one of the finest universities in Korea. While there are some Kookminians with proud academic places, a large number of high school students are also in favor of choosing KMU as the college they are willingly to enter. “There is no question that there is still elitism among students, parents and teachers these days. However, a number of my classmates in school and Hagwon (an academy institute for educational goals like college admission) and including myself, are keeping some colleges in mind to apply after completing the scholastic aptitude test, and KMU is high on the list. An acquaintance of mine, who is an alumni from my high school, told me that only few people entered the popular department of KMU, but the table has turned now. Everybody around me has positive images on KMU and some of them even said that they eagerly wished that they could have gone to KMU for their undergraduate studies,” said a third grade student in Baeksuk high school, Goyang city, Gyeonggi-Do.

There are also stories from Kookminians regarding the school from diverse viewpoints. Among the various opinions expressed, there is hardly any dissatisfaction with KMU. Several Kookminians have expressed the benefits of the school, for instance, like getting an internship in their specialized or major-related fields. Some others have recently realized that KMU’s reputation greatly preceded itself more than before, and even some other college students have noticed this change. “Somehow I had part-time jobs twice in Hagwon as an assistant instructor. The first time was in 2008 when I had never heard of KMU nor my current university. Now, I have noticed a big difference from the first time. There are so many kids talking about KMU in positive manners. Thus, I believe that KMU is one of the up-and-coming universities so I actually envy,” said a student at Seokyeong University. This is really great news for KMU. Additionally, there was a bit of surprising comment about the school. “Technically, I have once tried to transfer to another college before. During my preparation for the examination, I discovered many shocking facts. To be specific, one of my mates in Hagwon (preparing for transfer examinations) never could relate to my reasoning for transferring to another school. He told me that my action seemed to be detrimental to my own goods. In addition, during the transfer application period, the fierce competition for KMU was so great that I almost lost for words. Although I failed the examination, it became a turning point for me. Since then, I started to look at my school differently. Thanks to that experience, I finally realized that it would be all right for being a proud KMU student,” said a Kookminian from social sciences department.

According to many thoughts expressed by various people so far, the positive reputation is likely to lead KMU to bright future. There are also KMU staff who are working hard for the college development. Surely, KMU will be able to overcome academic elitism soon and it will become one of the well-organized educational institutes.

Kookmin University, moves up the rank for three consecutive years in the 2014 University Accre…