If You Don’t Understand English, You Won’t Learn Anything 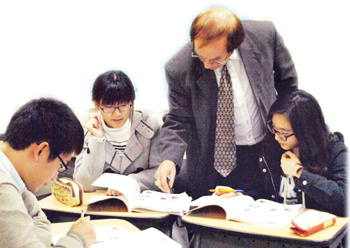 In 2009, Korean universities have been actively pursuing globalization. There is hardly a university that doesn’t have a slogan focusing on globalization.

One way that Korean universities are becoming more globalized is in the percentage of lectures that they give in English. The Joongang Education Development Institute gives high marks in their ranking system (20%) to universities for this ratio. For this reason, and in order to attract students, universities devote all their might to increase the number of lectures given in English. At Dongguk Business School this semester  more than half of all lectures were in English and it is planning to increase this percentage to 70% by the end of 2011. It is known that a local college provided a special grant of 200 thousand won for those who attend every class.

KMU is also starting to increase the number of lectures in English. “Many institutions for university evaluation assess how globalized universities are by the ratio of lectures given in English, so we at KMU had to do something. Last semester, the percentage of lectures in English was increased to 2.85%. Although it is not that easy to increase the percentage of lectures in English by even 1%, we need to do if we want to improve our ranking. This year KMU was ranked at number 40 again, the same ranking it received last year. “KMU supports professors who lecture in English more than ever,” a staff member of the Academic Affairs Team said. KMU gives a reward for lecturing in English: 1.5 million won for a three-credit class, and 1.2 million won for a two-credit class. For professors a 3 hour class lectured in English will be counted as a 4.5 credit hour class from next year on.

Are lectures in English successful as a globalization indicator? “There is a lecture in English that I have to take and to pass. Actually, students don’t study English very hard. It is even hard for them to preview and review because text books are written in English. In addition, Korean is usually spoken during the class,” Park Yi Jung (Junior, Dept. of Political Science and Diplomacy) added. A staff member of the Academic Affairs Team said “We are making several tools to perfect these classes. Confirming whether students were tested in English and getting feedback on the class after the semester are two things that are under consideration.”

We can find ideal cases where students and professors participate in the class wholeheartedly. Nam Hye Sun (Senior, Dept. of English Language and Literature) said, “I think lectures in English are a priceless chance to speak, to write, and listen to English. Lots of students have improved their English from these lectures. I have been motivated by seeing and hearing fluent speakers.”

Prof. Yun Jeong Sun (College of Business Administration) noted, “This term, I gave lectures in English for the first time. My students understood the substance very well and joined in the class positively. Their mid-exam average score was the same as when the lecture was in Korean. I think this might indicate that if they do their best, any university student could get a good grade when lectures are in English.”

In a recent survey, Korea had the 3rd largest number of students studying in the U.S. The Korean English education market has been growing year after year. The Republic of Korea, one of the biggest markets for English learning, has students cramming to learn English from their childhood days to well into when they become grown-up. Now, English is invading the spheres of lectures in Korean universities. It’s time to choose: if you can understand lectures in English, you will learn, but if you don’t, you won’t learn anything.

Jump into a Global Relationship