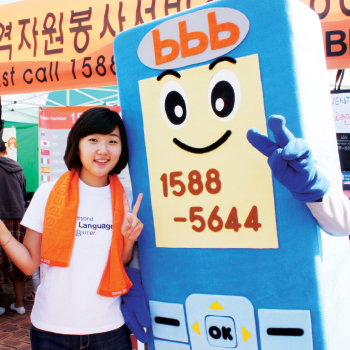 When Jeremy traveled Jeju island, he saw very beautiful flowers, but when he tried to touch them, a woman stopped him because the flowers were poisonous, but Jeremy didn’t know that and misunderstood her behavior so he got angry. After quarreling they eventually called BBB to resolve the problem. How fortunate it was for: it might have been a serious situation if they hadn’t known about BBB.

Have you heard about BBB? BBB stands for Before Babel Brigade, a volunteer organization, founded for a world free from language barriers similar to the way the world was before the Tower of Babel was destroyed. BBB was initiated by the Joongang Ilbo to help foreigners with communication difficulties during the 2002 World Cup co-hosted with Japan. At that time there were many volunteer services, but BBB is one of the few that has continued until now, while most others have stopped. This is because BBB is a very helpful service but it doesn’t require volunteers to devote lots of spare time or money. If you call 1588-5644 you can receive free interpretation help anywhere, anytime from volunteers. In taxis, hospitals, department stores, even in the police station you can contact them. The service is available from early in the morning, to late at night.
BBB now has 3000 volunteers for 17 languages both inside and outside of Korea, who offer a translation service by phone at any time. Members are former diplomats, retired and current professors, workers, and students, people who don’t normally work together but are working at BBB in the name of helping others. Ki Young Eun (Senior, Dept. of English Language and Literature), a Kookminian, who has been interpreting for BBB since 2005 said. “I have gotten calls from foreigners who were in the police station, and from taxi drivers who didn’t know what a passenger wants; one day I got a call from a hospital and I explained the names of diseases and cautioned a patient.”
There are many merits to volunteers. First, volunteers can help without having to spend time commuting, Second, helpers don’t have to pay any money themselves. Compared to other volunteer work, these factors are really fantastic as volunteers for other organizations may have to forsake many hours of their time and use their own money. Third, volunteers can sustain their language skills. There are few places to speak Japanese and English or other languages in Korea. If you work for BBB, you will have many chances to speak other languages.
Surely, it’s also a good help for foreigners. Finding where to go, having surgery, talking with a husband or wife for those in mixed marriages, there are many situations where BBB can offer help and alleviate what might otherwise be a serious communication problem.
BBB also contributes to improving Korea’s national image. It gives volunteers a chance to introduce many sightseeing places and resolve misunderstandings foreigners might have. Jun Yoon Jung (Senior, Ehwa University) said, “I have gotten many calls from people wanting help to find their way somewhere. The most memorable was a call I got from someone who wanted to know how to get to Kyungbokkong. When I helped him to find the way, he asked about other places for sightseeing, so I introduced him to Insadong and Samchungdong. After the call, one statement made me pause: “It’s work that is not only interpreting but also introducing Korea.” My heart was full because of that.”
BBB received 5000 calls in 2004, 32000 calls last year, and expects to receive up to 50000 calls this year. The more multicultural families and international exchanges there are, the more demand there is for interpreting, not only in English and Chinese but also in other languages such as Vietnamese, Malaysian, Indonesian, Portuguese. BBB; the number one free interpretation phone service, will above all, continue to carry out its mission.

If You Don’t Understand English, You Won’t Learn Anything

View of Korean and International Students During the 2009 KMU Festival