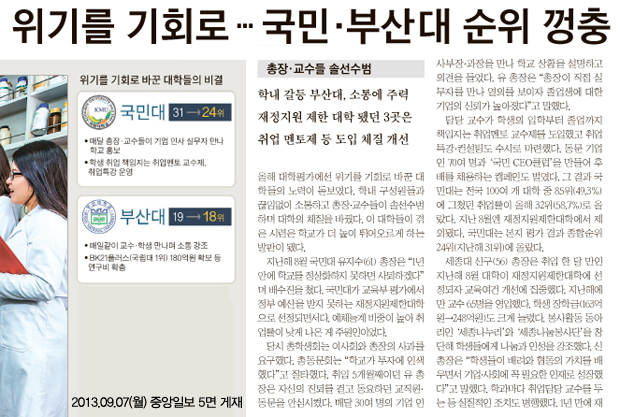 Kookmin University was ranked 24th on Joongang Ilbo’s University Evaluation for 100 domestic 4-year-course universities. The evaluation was made based on 4 criteria (total of 300 points for perfect score) including professors’ research (100 points), educational conditions (90 points), reputation • social advancement (60 points) and internationalization (50 points). Compared to previous year’s rank which was 31st on the list, this year’s rank was an improvement of 7 ranks. Kookmin University has received high evaluations due to the increase in recruitment of professors, increase in foreign reputation, increase in employment rate, increase in the total amount of scholarships, and activation of employment mentorship teaching system.

Among the four criteria, reputation • social advancement has received the highest evaluation score. Such high score was attributed to the establishment of an employment mentorship teaching system where a responsible professor guides a student from admission to graduation. Also, acknowledgement of the university’s active support by organizing job fairs and employment seminars along with frequent counseling have also contributed to such high evaluation. In line with these, a campaign was held together by 70 businessmen who are members of alumni with ‘National CEO Club,’ making it possible to increase the employment of protégés. With the establishment of additional Job Café among other businesses, employment rate has increased by 9.4% compared to previous year and the 32nd rank was obtained (58.7%).

Moreover, current acknowledgement of enthusiasm which has been shown through direct interview with 30 corporate hiring management officers monthly as an exchange of opinions and current educational status have helped the graduates gain trust and confidence.

In relation to educational environment, Kookmin University enforced major recruitment of full-time instructors and raised the amount for scholarships by 7.7 billion won while reducing tuition by 2.5% (0.5% of domestic average). The rate of guarantee for professors has increased by 15.3% while the provision of scholarship went up by 6.0%. These numbers clearly show Kookmin University’s active contribution and efforts in reforming its educational conditions.

In the same manner, the field of internationalization has been continuously developed year by year to the point of exceeding 1000 foreign students enrolled in the degree programs. Especially, amongst 100 universities that were subjected to the evaluation, the ratio of degree program-registered foreign students against the total has achieved the 6th rank.