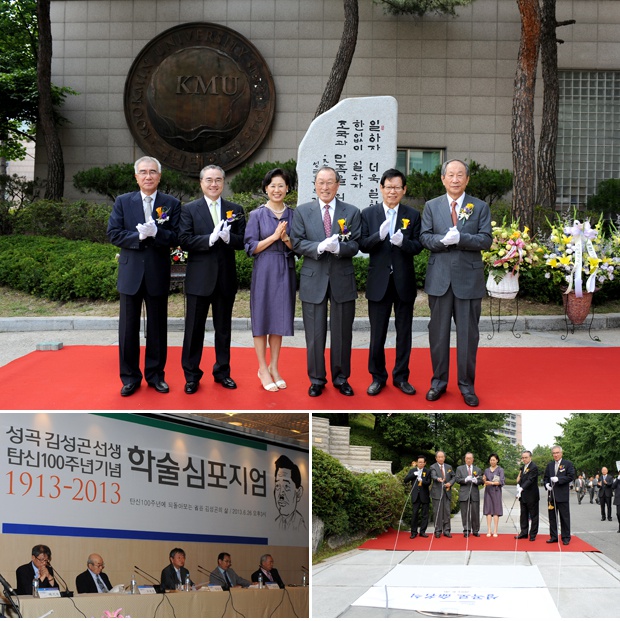 The academic symposium held for the 100th anniversary of Seonggok Kim, Seong-gon’s birth was held in the presence of about 200 guests including President Seok-won Kim, chair of the board Chae-gyeom Kim, president of Bible Histories Jong-wu Han, President Ji-su Yu, and president of alumni association Jong-ung Yun at 3 p.m. on the 26th.

According to the preface of the monument journals, President Yu said, “In celebration of the 100th anniversary of the birth of Seonggok Kim, Seong-gon who led to the foundation of today’s Kookmin University, this event was prepared with all members within and outside of the university to commemorate the life, accomplishments, and personal dimension of Seonggok while highlighting his contributions in the field of academe, politics, economy, media, and physical education. I hope it will serve as a meaningful time to think further on the refinement of the talented to be cultivated in Kookmin University.

After the symposium, the ceremony to unveil the Seonggok’s quotation monument and christen the Seonggok Road was held in front of the main hall. The unveiling ceremony was held to gain valuable lessons for Kookmin University to overcome the challenges of today by tracing back the path of Seonggok who pioneered the revival of the university, aiming at the cultivation of the talented in Korea amidst the turbulent and challenging times. Meanwhile, the path from the statue of Yongduri up to Seonggok Library was christened as “Seonggok Road” to engrave the spirit of Seonggok.

The photo exhibition that has been held from June 24 (Mon.) at K. Art Gallery will continue until July 5th (Fri.).
Prev