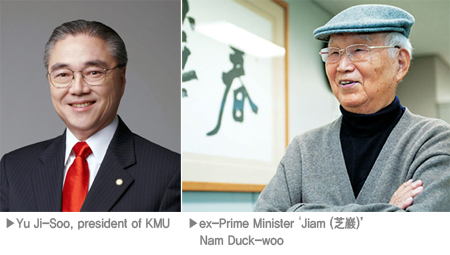 Yu Ji-Soo, president of KMU, revealed that he would open Jiam (芝巖) Innovators' Studio, naming it after the pen-name of ex-Prime Minister Nam Duck-woo (1946 graduate of Political Science Department) who died on the 18th.

‘Jiam Innovators’ Studio’ is the organization aimed at the establishment of youth business in the exclusive space for venture foundation following the payment of full tuition fee through scholarship to about 30 students selected having challenging entrepreneurship, for which, successful alumni venture entrepreneurs will be invited as the foundation mentor to the forum that focuses on casual conversation and advice rather than lecture presentation so as to provide full support for the success of venture.

Usually, ex-Prime Minister Nam Duck-woo would say that he was shocked by a research center in Taiwan hanging up the signboard stating “We can work out any kind of technology in question”. He pointed out that the change in industrial structure resulted in the collapse of traditional manufacturing business and small businesses. He believed and emphasized that rehabilitation of small businesses should be a big spindle for national development.

Thus, Yu Ji-Soo, president of KMU, said “Establishing ‘Jiam Innovators’ Studio’ is aimed at following up the intention of ex-Prime Minister Nam Duck-woo, in which, talents necessary for the rehabilitation of small businesses will be cultivated through the youth foundation based on fusion without any restricted condition such as credit completion, etc.”