The memorial service in commemoration of the 57th anniversary of Haegong Shin, Ik-Hee, the founder of Kookmin University 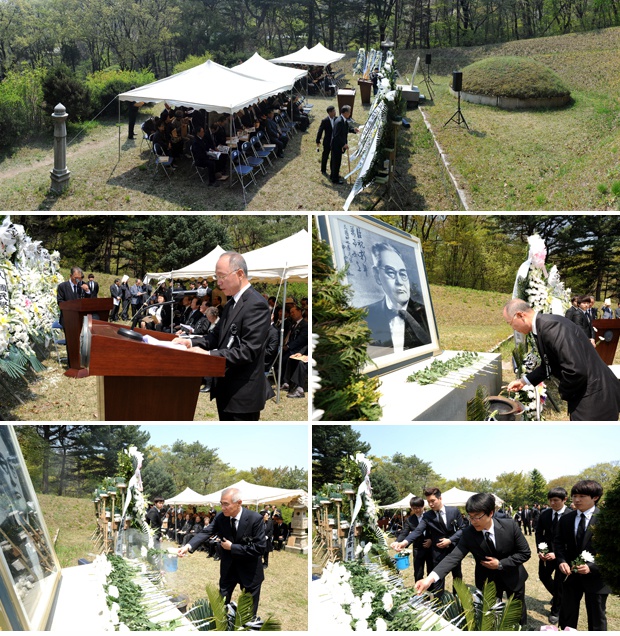 The memorial service in commemoration of the 57th anniversary of Haegong Shin, Ik-Hee was held at the tomb located in Suyu-ri, Seoul on the 5th (Sunday) supervised by the Commemoration Service Association of Haegong Shin, Ik-Hee (President: Deok-wu Nam). Haegong Shin, Ik-Hee was the first dean of Kookmin University and he was the one who laid the groundwork for parliamentary democracy as Chairman of the National Assembly after the national independence. He consecutively held various positions like Attorney General and Minister of the Home and Foreign Affairs of the Provisional Government of the Republic of Korea.

Through the condolence address read by the Vice-President of Kookmin University Cha-gyun Shin, he pledged, “Haegong Shin, Ik-hee established today’s Kookmin University facing the necessity of cultivating the national history. Thus, he set the school motto as ‘Never forget about the rises and falls of the nation while reading’ and ‘Love your school as your own home.’ Likewise, he was a prominent educational pioneer who emphasized devotion to the academe as well as harmonization of private and public affairs.” He also added, “We will develop Kookmin University into an academic organization that produces excellent human resource based on such noble founding philosophy.”

Haegong Shin, Ik-hee was born in Gwangju, Gyeonggi Province (July 11, 1892 ~ May 5, 1956). After graduating from Hanseong Foreign Language School in 1908 and Waseda University majored in political management, he returned to Korea in 1913 and opened the Dongmyeong School. He taught students in Jungdong School in Seoul and became a professor of Boseong Law and Commercial College in 1917.

During the March 1st independence movement in 1919, he took charge as an overseas liaison and at that time, he sought asylum in China and had a secret meeting to organize a provisional government. He started a provisional meeting with parliamentarians and proclaimed resolutions regarding the name of the country, legal system, government officials, and provisional charter as a way to contribute to the birth of the historical Provisional Government of the Republic of Korea.

After the national independence, he carried out his duties as the vice-president of Korean National Association of Independence Promotion, president of Jayu Newspaper, and first dean of Kookmin University while working as the chair of lawmakers in 1947 and vice-chair of the members of the Constituent Assembly in 1948.

In commemoration of his invaluable contribution, the Korean government conferred the posthumous Order of Merit for National Foundation, Republic of Korea Medal in 1962.
Prev