A scholarship is one of the important key points for those who want to kill two birds with one stone: have fun and obtain satisfactory academic grades. Since university tuition fees are high in Korea, scholarships are an excellent tool that not only eases financial burdens but also promotes further study. The Kookmin Review looked into the current financial aid and grant system newly established in 2013.

“The details on scholarships will be changed from this first semester. The school reformed regulations last semester. Up until last year, to apply for a scholarship students had to earn 16-17 credits and then their average had to be at least 2.5. Now we have eased the rules. Undergraduate students with a GPA of 2.0 or above and who have earned 14-15 credits are eligible for some scholarship programs except for Academic Performance Scholarships.” The new scholarship policies are posted in the ‘Scholarship Notices’ section at school’s official website.
There are two types of Study Scholarships; the Student Support Team is in charge of one of them, and each department takes the other. The former Study Scholarship by the Student Support Team is divided into three levels based on the students’ household income level. However, the latter Study Scholarship instituted by each department extends financial assistance from ‘the top’ level to the ‘fourth’ level of students. There was only one level of financial assistance before in the Study Scholarship in each department in the past, and it gave 20% of the tuition fee. Also it was re-titled the ‘College Scholarship’ to express its new quality that selects recipients by each department’s standards.
After she summarized the new policy of scholarships, she finished her interview with the comment for students: “There are numerous internal scholarships and external scholarships as well. As long as you put an effort to seek them, you can’t miss the opportunities. I hope you will be active and try to find funding sources.” 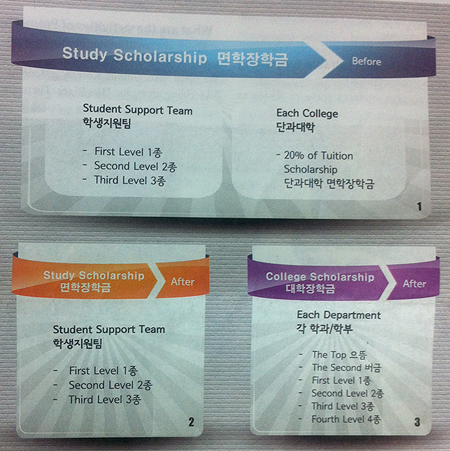 Kookmin University provides foreign students with a grant system to encourage their study and to support financially. Review called on the Institute of International Education and met Lee Mi-Ji, an Assistant Manager, to get information on financial aid programs for foreign students with foreign parents. “KMU offers tuition grants for those who get good grades. We have tightened the qualifications for scholarships since 2010”, she said. From 2011, students with a GPA of 2.5 or above and who have earned more than 12 credits are entitled to receive scholarships. There are 4 levels of the grants system: ‘Sung-gok’ which covers 100% or full tuition, ‘Top’ which covers 70%, a 50% coverage scholarship and a 30% coverage scholarship. Additionally, to award education funding, students have to make a constant effort in learning Korean as well since scholarships are not only offered according to their school records but also their TOPIK score (Test of Proficiency in Korean). “We expect students to study hard as the tightened rules are better for those who want to learn,” Ms. Lee said.