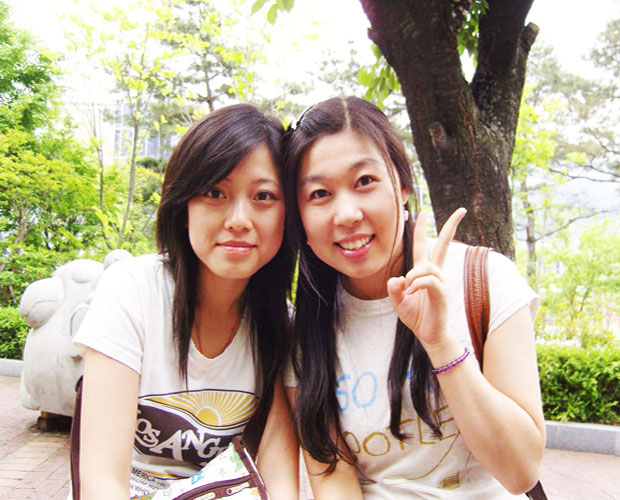 We interviewed those Chinese exchange students about their thoughts of and KMU, their goals and dreams. Also, how did they come to KMU and what are their purposes in KMU.

Q1. What are your purposes to study oversea in , and how did you pick KMU?

Xin: I came to learn Korean language. In , enterprises prefer to hire employees who are armed with second language. A friend of my father introduced me KMU. I thought that KMU is the most valuable university in because of its name. Kookmin (guomin in Chinese) stands for pretty valuable thing in Chinese. But in , well known Korean universities were only , , and Kyunghee. So I was a bit disappointed and distrusted to KMU, but it is good to be here so far.

Zhang: It was an opportunity to come in my case. Almost all of Chinese oversea students in are exchange students who took their opportunities. I didn’t want to forget my Korean I’ve learned at the Collge of Cultural Study in Buyeo. A senior introduced me KMU’s graduate school, so I came to study pottery art in KMU.

Q2. What’s the difference between Chinese and ?

Xin: We don’t have that strict relationship between senior and junior. We just call names and no certain manner in drinking. Life budget is cheaper in ; other than those, it’s not very different.

Zhang: Dormitory gate gets closed at 11 pm in . Chinese students get up at and do the collective stretching. Mostly, Chinese universities make much of credits in physical training for students’ health.

And this is not campus life, but for overtime work, such as part-time jobs, we take over time wages in .

In , we also put much effort to earn skill licenses or language proofs, but Korean put way harder effort on them.

Q4. When did you have your hard time and felt happy in KMU?

Xin: I’m glad to have wonderful friends like Zhang. And I thank to people who help me in campus; professors, classmates, and club members.

As many other oversea students, language problem was the biggest difficulty to me. I couldn’t understand what professor said, so I missed a lot of assignments. I cried a lot. Also, Korean senior and junior relationship was hard to understand. Especially in class party, I’ve heard a lot of scolding because of unmannered Korean behaves.

Zhang: Probably, I was so sorry that I disturbed people with my language problems. I asked what I missed in class to my classmate so many times. Though she was a very nice person, she was mad at me because I asked same questions everyday. And there is no such software to translate my report to Korean from Chinese. But I made many good memories in ; trip to , Presidential Vote, and 2008 Olympic frame bearing. To myself, I love travel, so it was good to stay in .

Q5. What are your goals in KMU?

Xin: I’m not a good Korean speaker yet. By the way, I will put more effort on my Korean language. Also, I’d like to continue my study in KMU as a graduate student, if I can take that opportunity. I want to work at trading company where take business between and .

Zhang: I hope to travel as many as possible in before I go back to in next February. Also, I want to get good score in my Korean language exam (KPT). Finally, I hope my graduation essay gets passed.