There is no future for a nation that has forgotten history.

Kim Se-hong, a student of big data analytics and business statistics, who took the tour last year, said: “I wasn’t much interested in history before, but after having participated in the program, I’m proud of the Korean people. Listening to my professors’ explanations, I thought that I ought to continue my ancestors’ spirit — the spirit of those who protected my country — and pass it on to future generations.” This year marks the 101st anniversary of the March 1, 1919, Independence Movement, one of the biggest triggers for the provisional government’s establishment. The movement served as a catalyst for the spread of independence across the Korean Peninsula.

To commemorate the movement, KMU's English-language newspaper will regularly introduce those who worked toward independence. The first is Yu Gwan-sun, a martyr who passed away 100 years ago. 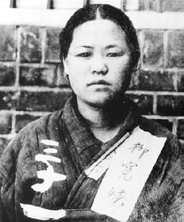 Yu Gwan-sun was born in Cheonan, South Chungcheong, and went to Ewha Girls’ High School in 1918. When the March 1, 1919, Independence Movement took place, she participated in student protests. When the Japanese Governor-General closed the school, she went down to Cheonan to participate in the Manse Demonstration. About 3,000 people gathered at the Cheonan Aunae Market on April 1. Yu Kwan-sun was also at the scene. She delivered a speech calling for Korea’s independence by handing out the Taegeukgi, the Korean flag. The Japanese military police arrived and fired on the crowd, killing 19 people, including Yu's parents. She was later taken by a military police officer and transferred to Seodaemun Prison, located in the modern-day Independence Gate, after passing through Gongju Prison.

Yu continued her cry for independence from prison, refusing to give up under torture. On March 1, 1920, the movement’s one-year anniversary, a massive campaign was carried out by the imprisoned comrades. This led to Yu being held in an underground cell and subjected to yet more torture. She died at around 8 a.m. on Sept. 28, 1920, at the age of 18 in Seodaemun Prison due to the aftereffects of torture and malnutrition

When we asked Kim how she remembers Yu, she said, “When I first learned about the concept of a ‘great person,’ ‘Yu Kwan-sun’ was first such example I was given. She achieved so much for her country at such a young age. We should all learn history and understand that loving a country isn’t a matter of age.”

Yu left a single message behind in prison: “Even if my fingernails are torn out, my nose and ears are ripped apart, and my legs and arms are crushed, this physical pain does not compare to the pain of losing my nation. My only remorse is not being able to do more than dedicating my life to my country.”Yu Gwan-sun fight for independence despite her young age. Even if your remembrance of her struggle spans the length of time it takes you to read this article, I hope Yu’s love for her country is forever etched in your heart.