Do you know about the newly changed buildings? 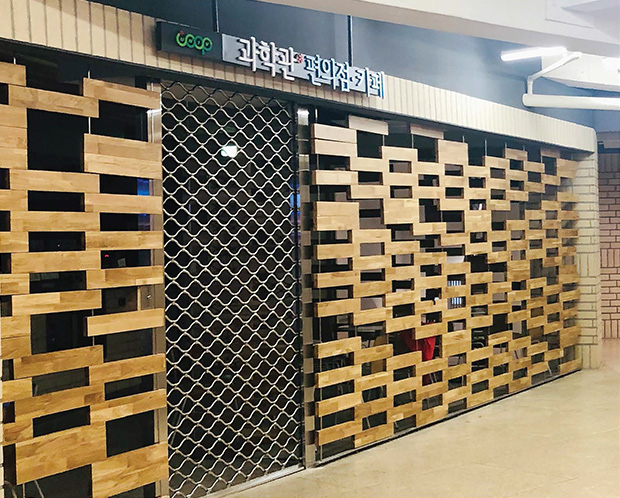 March is back, informing us that the beginning of the new semester and the beginning of spring are both upon us. In addition to new classes for upperclassmen, new students are also now joining the university. Some students say, "Our building has changed!" They must have been surprised, and their reaction is justified: some school buildings have been remodeled. Let find out just what happened in the three months between semesters.

First, let's discuss the state of the "Engineer­ing College," which is located by the school's front gate. In the past, we had to walk through a hallway with a multipurpose room, a club room, and other such rooms in order to access the rest area. Yet now the multipurpose room has been changed into a place of rest so that more students might rest than before. The cafe has also changed locations — now residing where the rest area previously was — making it easier for students to gain access to it. Some desks have been installed with multitap to make it easier for students to use laptops or cellphones, while the interior, including the building's ceiling, has also been improved. We interviewed students who use the Engineering College facilities to see what they thought about the remodeling. The following are edited excerpts from the interview.

Q. What was your first impression of the remodeling?

A. I could easily tell that had something changed.

Q. What are the pros and cons?
A. The advantages are the rest area, the wider stores, and that there is now a more convenient garbage disposal system. The disadvantages are that the stairs were not remodeled. The Science College was also partially refurbished. There used to be a cafe located in the Science College main entrance and a store underground. Now you can see that the cafe has been integrated inside the Science College. However, the reading room was removed and they built both a store and a cafe in its place. The Science College has been undergoing work since summer 2018. The stairwell's appearance, as well as those of the first and the second floors, was changed, and a rest area was included beneath the stairs. Additionally, a self-study space was added to the second floor. Last winter vacation, the location of the store and the cafe were changed, and the space where they stood was remodeled into additional classroom space on the third floor. Here again, we interviewed students who use the Science College's facilities to see what they thought about the remodeling. The following are edited excerpts from the interview.

Q. What was your first impression of the remodeling?

A. I thought it was a lot cleaner and prettier.

Q. What are the pros and cons?
A. I think it a good look. The cafe and store are a good combination — you don't have to go outside. The downside is that the reading room has disappeared, meaning that students lost their study space in Science College.

Finally, the Fusion Innovation Classroom located on the ninth floor of the Bukakgwan building was also renovated. Unlike the building original classroom, you can see that this room is clearly different. The room has become a new classroom for "TeamTeamClass." It's a subject designed for fusion class.

Other buildings have also undergone a variety of changes. Look around and see if you can't spot how the school has changed!

How to use E-Campus?