After a long break, there are now only a few days left until the beginning of the new semester. New faces will appear around campus with their fresh new looks, just as the university adds some of its own new features. The university has been renewing buildings, starting with the installation of photo booths to refurbish university properties. The newly installed art objects are the most obvious and significant changes made over the break. Some of them were made by Kookmin University (KMU) students, while others were done by foreign artists. Take a look at these up-to-date structures around campus and see the purpose with which the artists created them. Part of this article has been referred from the Kookmin Press. 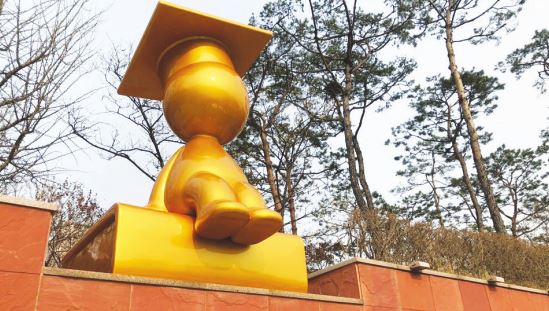 New Greetings from the Golden Mascot
The very first thing students will likely see when they enter campus this March is the new sculpture. The bronze-toned golden figure is about 3 meters high and 2 meters wide. It is reminiscent of a “doodled human” sitting on a block with a graduation cap. At first, it may resemble a temporary, seasonal ornament, but it is quite obvious that the statue will be a school mascot in no time. Many students may feel a sense of familiarity and even joy at this doodled human. The statue was built by the well-known Italian industrial product designer Stefano Giovannoni, who has collaborated with several international companies, including LG and Paris Baguette. The work was completed a few days prior to KMU graduation. According to the administration, it is a metaphor depicting hope for a golden future, one just as bright as the statue’s color, for the students and passersby who see it on daily basis. Giovannoni is still contemplating his work’s name, so the statue does not yet have a name or an explanation.
A great number of students are probably already aware of the work, and the remainder of the students and faculty members will not miss it as they pass by the gigantic statue. 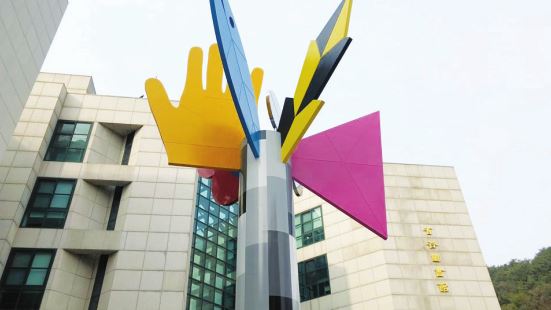 There is another campus addition that many will easily notice, one which was also done by a foreign artist: the “Grande Fiore,” the Big Flower. This statue replaced the old statue of Shin Ik-hui that stood right outside the university library. Students walking into the library used to take pictures of KMU kitties ― known as “Kook-nyangies” ― that sat on the Shin Ik-hui statue or the lawn around him, but that is now a thing of the past. “Grande Fiore” will welcome people with its creative design from now on. The 11.4-meter-tall statue is made from stainless steel. Each flag, or token, has a different shape ― a hand, a fish-like leaf, a thunderbolt, a pink triangle, a molecular model, and an emblem that resembles a peanut ― each representing the six different branches of study. The hand represents people, mankind and tradition; the leaf represents animals and nature; the thunderbolt stands in for art and design; the triangle for technology and mathematics; the molecule for science; and the peanut shape for literature, homeland and the soul of mankind. All of these diverse flags are connected to a single branch, or a pillar, showing the ultimate harmony and the university’s vision. 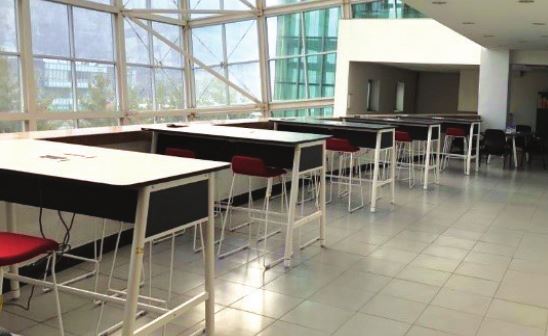 Other than the aesthetically-pleasing sculptures, several updates have been made around campus. For example, the science building received a brand-new cafeteria, as well as new photo booths for graduates and incoming freshmen. On top of these renovations, the business building also received a major modification. Five sets of student study desks and two sets of group discussion desks replaced the original three big tables that were located on the third floor. Individual desks have been built in outlets that can be used for many purposes. Three bean bags on either end of the hall also provide comfortable spots for students who are having short conversations. It also shows how faculty members tried to reflect students’ needs into the renovations. One student mentioned that he prefers the new desks since more students can now sit together to work on projects.

Campus has undergone several major changes over vacation, all of which show the university’s vision and care about the students and the establishment. The new potential mascot will greet passersby with its golden energy and the Big Flower will add more dynamics around campus. Today’s KMU is filled with colorful dynamics that reflect its diverse student body. In the upcoming 2019 semester, students may try to discover additional adjustments that campus has made for them.

Special Lectures on every Thursday

Do You Want to Spend Vacation Meaningfully? Do Junior CoREP!