Kakao Talk, Amazon, Apple, and all the great companies making thousands and millions dollars of profits every month did not start out with the same level of success from the very first beginning. Even for just a few months earlier, some of these companies were still doubtful of their success. That is quite a different image from how they are seen nowadays. All the great achievements we have here now have started with a sparkle of some imagination, wills to make that imagination become realized, and courage to endure some hardships and failures. 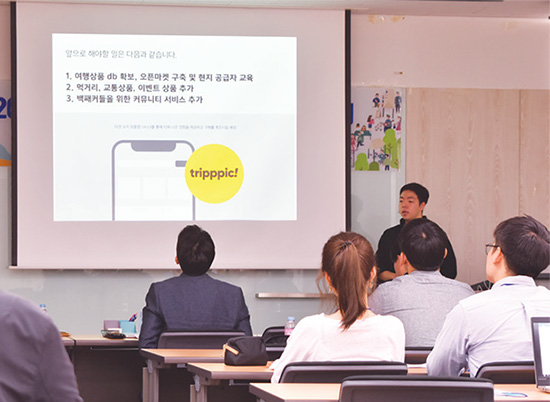 ▲A participant answering questions from the panel of judges

But still, there are so many students who hesitate to show their ideas out to others and to actually make an effort to realize them. For all these hesitations, Kookmin University has established the ‘Start-Up support center’. The center makes various efforts to encourage students to bring up their own unique ideas and supports them to successfully launch start-up companies. Started in 2014, thesupport center conducted programs such as start-up club system, start-up com petitions and after start-up support, global expansion support, et cetera. One of those efforts is the‘Kookmin Rocket-Pitch competition’. This is an annually held competition where the participants present for a short period of time about their plans for start-ups. At the finals, the panel of judges asks realistic questions to the participants and gives advices on ways to make actual improvements. So even if it is not for the winners, all the students can benefit from just participating.

▲Participants taking a photo together after the competition

A support center staff, Ha Yeong-Jin, who is in charge of the Rocket Pitch competition gave us a lot of information during the interview. Obviously, we knew that the purpose of this competition was to encourage students to realize their ideas with specific plans, and eventually helping them to make at least the first step towards an actual start-up. Since it has been four years from the start of the Rocket Pitch competition in 2014, the thing we wondered the most was, ‘Are there any students who actually launched a start-up or set up a company?’ About this, Ha Yeong-Jin said, “Student Park Jong-Su, who was the winner in 2017, evoked positive response from the panel of judges, and got a constant support from the Start-Up support center even after the competition.” The after-support is given in various ways. Not only the financial support, but also mentoring services by professionals in the areas of business fundamentals, a lot of opportunities for programs and lectures are given.

But even reading through all this article, most of you might be still afraid of the idea of an actual start-up. The reason would be that you feel a real business would be successful only with great and specific ideas. But the truth is that concise ideas are more likely to make a great success. Observing the Rocket Pitch competition this year, we have seen some examples that might help you to remove your hesitation. First, there is ‘Spinning snacks for alcohols’. This team presented an idea that they would make good use of the existing systems like conveyor belts, and the pricing methods used in the ‘Spinning Sushi store’, which we are familiar with. This surely doesn’t require any professional technologies or knowledge. Second, there is ‘Theater in your home’. This team wanted to make things cheaper so that people could afford what they want. So they came up with their own way to sell a movie projector set in the price range of $200-$300 by simplifying the transaction system. This also is one idea of making good use of things that already exist. 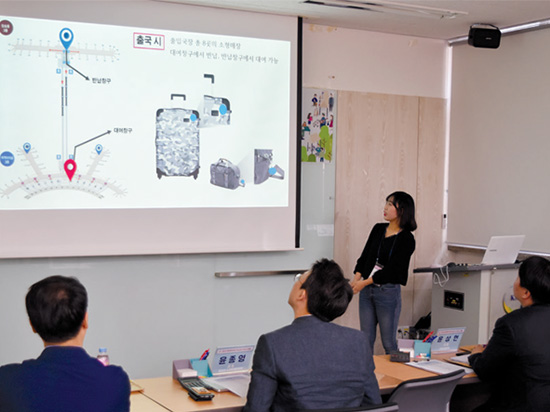 ▲A participant presenting the idea as a team leader

Making applications, building new products, or using high technologies is not the only way for a successful start-up. Simplest ideas can lead to great success. So, never hesitate. The idea you have may actually be greater than you think.

What Are You Doing During This Winter Holiday?