Behind the Scenes of the DAE DONG FESTIVAL!

Left: Students selling fresh pineapples at the Dae Dong festival
Right: The band ‘Magenta’ performing at Kookmin Got Talent
All Photos are by the Kookmin Review (unless stated otherwise)

Editor's Note
The school's biggest event of the semester which is the spring festival, or otherwise called, Dae Dong Jae was held last week. The Kookmin Review wishes that everyone had lots of fun during the festival and most importantly, had a safe experience. Behind this extravagant fiesta, there are people who worked behind the scenes to prepare for the festival for all of the Kookminians, and they are the school's student council, Gonggam. Gonggam started preparing for the much anticipated event as early as the start of April and the Kookmin Review interviewed our student council president, Tae-Jun Lee for the inside scoop on what goes behind the scenes of Dae Dong Jae. Before we start, most of the festivals in universities are referred to as Dae Dong Jae and you might be wondering why the festivals are called as such. Dae Dong Jae, in short, means coming together in unity, pretty fitting for a festival name, right? But, there is more. Its name is befitting to the timing of the festival season as well. Lots of universities held their festivals during the week that includes the 18th of May, and that is no coincidence. The origin and the reason why many universities' festivals are called Dae Dong Jae, go all the way back to the May 18th democratization movement in 1980. As everyone knows, Gwangju was the center of the democratization movement during the Chun Doo-Hwan government, and it suffered devastating attacks and massacres ordered by the government. During the tumultuous and tragic period, the Gwangju region was completely cut off from the rest of the country and Gwangju citizens had to survive in seclusion with limited supplies and resources. The common occurrence that is to be anticipated in such a heartbreaking circumstance would be that the citizens would fight over the limited sources of food and other various supplies. But the surprising reality was that there had not been a single reported case of robbery or any crimes that have occurred during the period of isolation. Instead, the Gwangju citizens were altruistic – supporting themselves by giving and demonstrating what true autonomy is. Such autonomy and selflessness was unprecedented in the history of mankind, and Gwangju during the period, is referred to as the world of Dae Dong. Hence, the universities decided to call their festivals Dae Dong Jae to commemorate and uphold the spirit and held their festivals in the week that includes the 18th of May. Now with that trivia explained, let's dive in to the interview with our student body president! 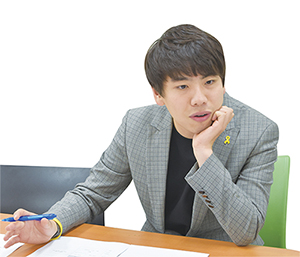 As many of you know already, the theme of this semester's festival was Cheongchun (youthhood) as reflected in Dae Dong Jae posters. The student body had worked on the event since the start of April with the preparation process including constant meetings and debates among the various student body departments. Our student body president told the Kookmin Review that he wanted the festival season to be a period where everyone can take a step back from their busy and fast-going daily lives for a day and just relax to have fun with friends and also have a time to reflect. The president remarked that 'the period of being a 20s-something seems as though it is filled with uncertainties and anxieties. We all went through high school, with one goal only, to get into a good college. For that single goal, we underwent fierce competition with the hope of getting admitted into the college of choice. After the uncertainties and overwhelming competitions during our teenage years, we are yet again, thrown into a whirlpool of another set of uncertainties and anxieties. This time, the goal is to get into a good company or to make a comfortable living. With that said, a lot of students are chased by worries that include getting good grades, achieving numerous awards and accumulating right qualifications, and the list goes on. On top of that, we tend to worry about these common troubles by ourselves, alone and secluded. So, for this festival, I wanted to create an environment where students can do things together, feel a sense of companionship, relax, have some time to unwind and build wonderful memories'. With the emphasis of companionship, youthhood and relaxation for the theme of the festival, the various booths that you would have visited during the festival reflected these said key words. For example, the 'Healing Therapy for Cheongchuns' where you could make candles and fresheners yourselves hands-on, were all inspired by the idea to help the students feel and find more relaxation in their hectic daily lives. On top of that, the president also told us that he wanted the festival to be autonomous where we all chip in and create the festival together in the spirit of companionship alongside with the student body, where the student council create a platform for the students to be a part of the festival. The program of 'Kookmin Got Talent' is a great example where the student council provided a platform for the Koominians to create performances and show off their hidden talents. Furthermore, the student body also created another special booth for the Kookminians to create a menstruation bracelets together to create awareness and enhance knowledge of the female body. Other than the previous mentioned activities and booths, the student body also created other activities such as Polaroid events and the Mole game which we hope that you all had fun with.

After the discussion of the activities of the festival, the interview went on to the topic of what our student body president was most concerned about regarding the festival which was mainly the safety of the students and the commercialization of especially the departmental pubs. Both elements have always been prone to create issues after the festival seasons. For example, sexual connotations that are used to advertise departmental pubs and revealing costumes that are worn by some of the students who work at the pubs have been one of the common issues that seem to arise across various universities after the festival seasons. 'The issue of safety and commercialization is what concerns me the most and this also goes along with the sense of autonomy. We hope that our students are autonomously and rationally sensible with how much they drink and also how they run and create the themes of their departmental pubs. Also, I expect our students to be respectful to one another and not make any insulting, discriminating and hateful comments towards fellow students and exemplify what autonomy is really about, like how Gwangju citizens did during the May 18th democratization movement'.

Overall, the festival was a blast thanks to our hardworking student body! I hope that our Kookmin Review readers found the festivals to be enjoyable and memorable and also find this 'behind the scenes' story of the festival interesting.