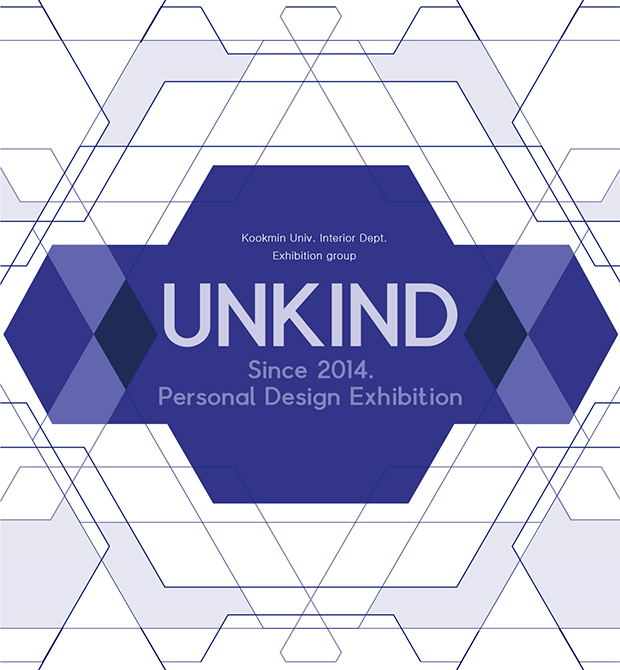 Everyone may become affected by a particular word that touches his/her heart. A person might remember a broken heart with the word ‘love,’ while another one may get enraged by the word ‘hurt.’ Because each individual has different interests and ideas, the world is in a dynamic state. At the first exhibition held by students from the Department of Interior Design at Kookmin University, visitors could peek at the thoughts of the designer as an artist. The exhibition was held at the Topohaus Art Center in Insadong-gil where the strong sense of a warm spring day can be felt. On April 8-14, the artists’ ideas represented by meaningful words were appreciated by visitors. Let’s meet Hong-Seok Kim (Batch 2009, Department of Interior Design, College of Design) and Tae-Seok Park (Batch 2009, Department of Interior Design, College of Design), two students who were in-charge of planning and management of the exhibit. 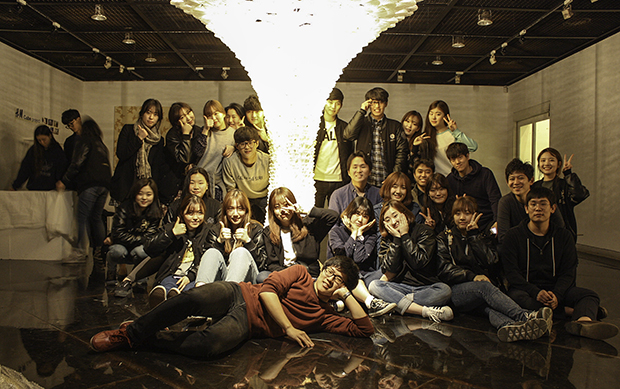 ▲ The student members of the exhibition club “UNKIND” of the Department of Interior Design,
College of Design, Kookmin University

Q. What is interior design?
As its name indicates, interior design is a subject that designs space. Students can comprehensively learn about shapes as related to space, as well as its interior. What we do is to show our works visually to people. However, there has been no organization that held exhibition activities regularly and systematically throughout the year. Rather, exhibitions were only hosted during the graduation period. In line with this, we wanted to provide opportunities where the students’ works may be showcased continuously all year round. Accordingly, we formed an exhibition club that functioned for such purpose and we named it ‘UNKIND.’ This is our first exhibition but we have a long-term plan. Since in this club the alumni as well as current students can join, the club members get along very well.

Q. What is the topic of this exhibition? What kind of perspective would you want the visitors to have?
If you create works with clear topics, you may be locked inside the frame. On the other hand, if you are too free, things become jumbled without any uniformity. Therefore, in this particular exhibition, we let students come up with their own expressions after choosing specific keywords; thus, we planned the exhibition of works accordingly. Because works were created by the space that surrounded us and each individual’s unique interest, you can consider that topics were also diverse. Various works were created according to keywords such as tradition, binding, color, trick, light and super ego. 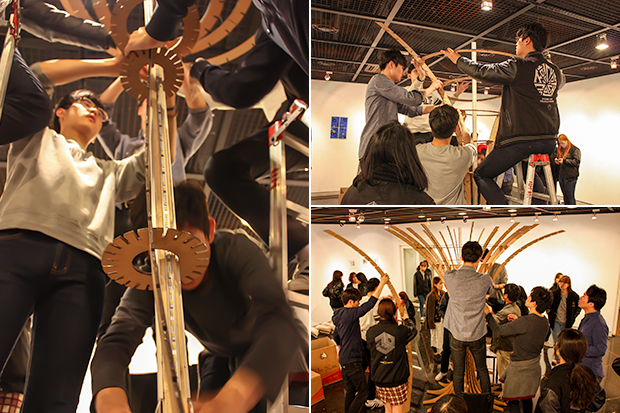 The curriculum of the Department Interior Design is focused more on students’ own creative thinking than practical operation. Even though techniques are taught at the school, professors think that students can learn techniques better at the practical field. This exhibition reflected the department’s philosophy. The exhibit was also meaningful because we were able to exhibit works created using the digital fabrication method. These works can be created with the computer algorithm but not with human hands. We would like to show people the beauty of works created with the digital method. The pavilion constructed with a large number of paper fans is set to be exhibited at the lobby and front yard of the College of Design building of Kookmin University on April 14 to 24. Please come and enjoy the exhibition. 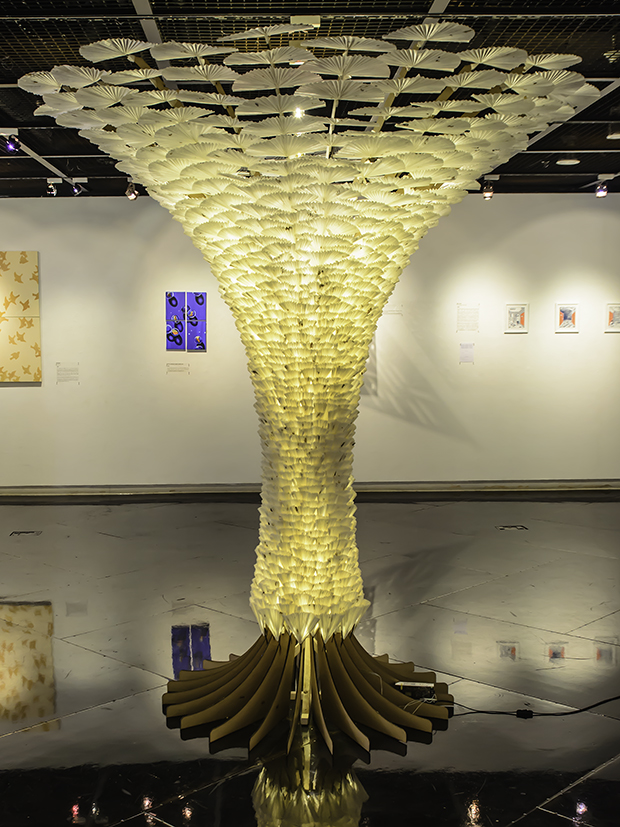 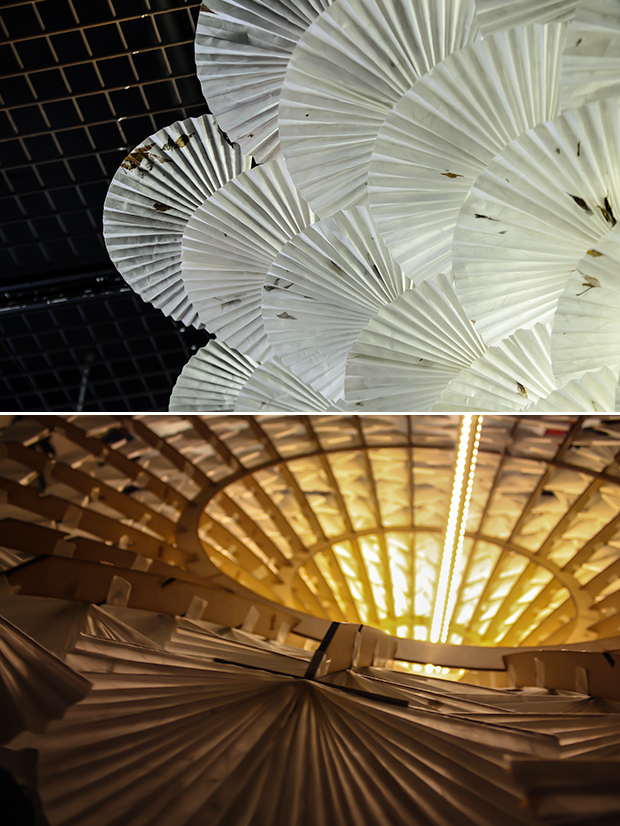 The fan dance we commonly know is a group dance developed from the inherited traditional fan dance created by the dancer Baek-Bong Kim in the mid-20th century.
Various beautiful shapes can be formed according to the degree of fan folding and how fans are combined and arranged.
The morphogenesis fabrication using the fan shape panel can be found in nature.
The width of the palm tree trunk gets smaller as it goes up towards the top. Fan-shaped skin panels surround the trunk by reducing the angle.
Paper fans that can be folded easily by anyone are attached to the letter Y-shaped joints with different angles produced with the ‘Grasshopper’ program.
The final shape is completed by inserting the “fan-joint” combination structure to the designated home in the frame that contains lighting equipment inside. 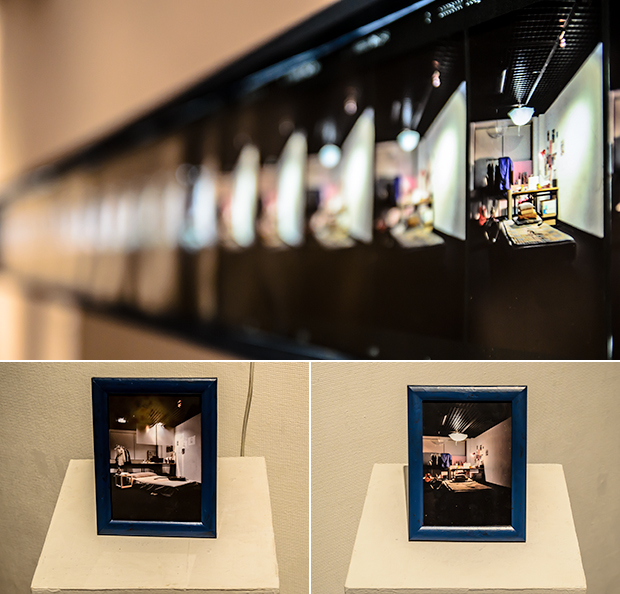 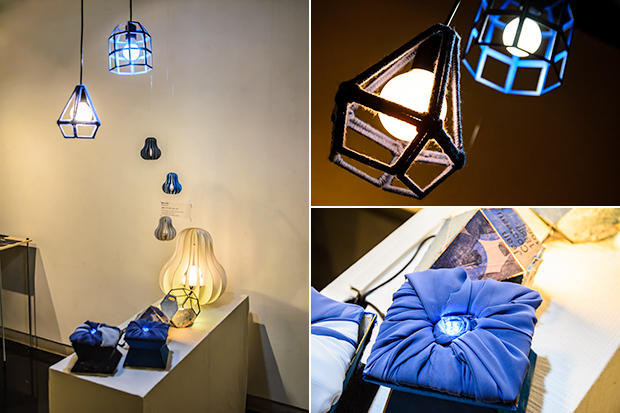 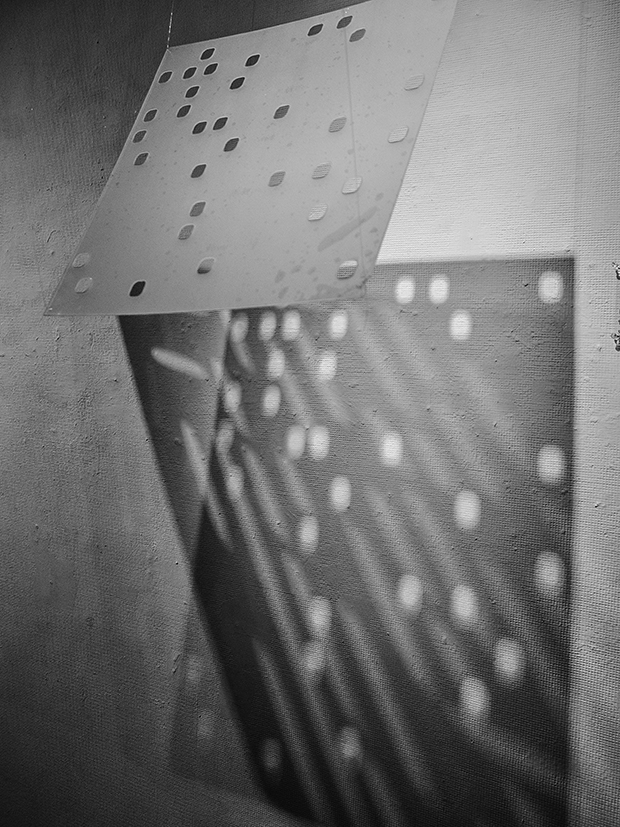 [Trick of light by Da-Mi Jeong]

The free-flowing image of the pattern of light that entered from gaps
on the ceiling looks like a musical performance.
I attempted to make the flow of light in several layers
inside the frame look like music recorded in a music score. 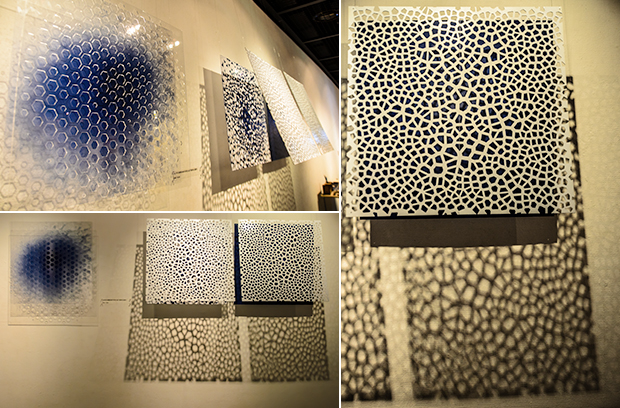 [When I approached because of deception by shadow,
there was no shadow by Jae-Son Park, Soo-Mi Lee] 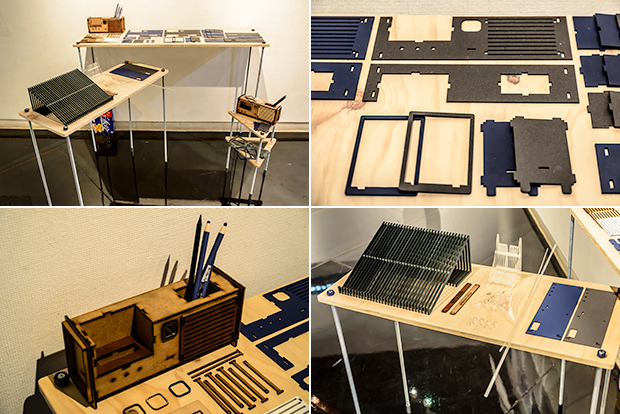 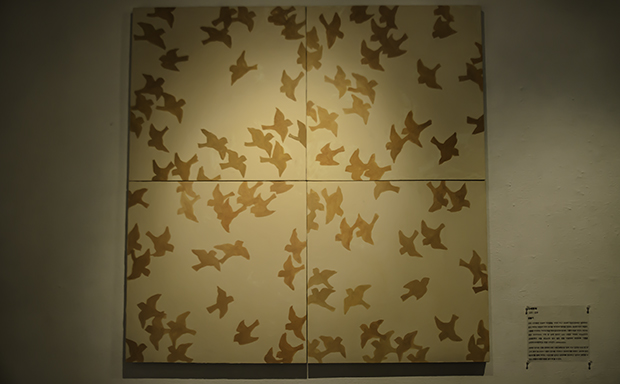 This kind of method is being forgotten due to insufficient understanding of traditional culture. Through this work, I would like the people to remember and feel our ancestors’ sentiments. 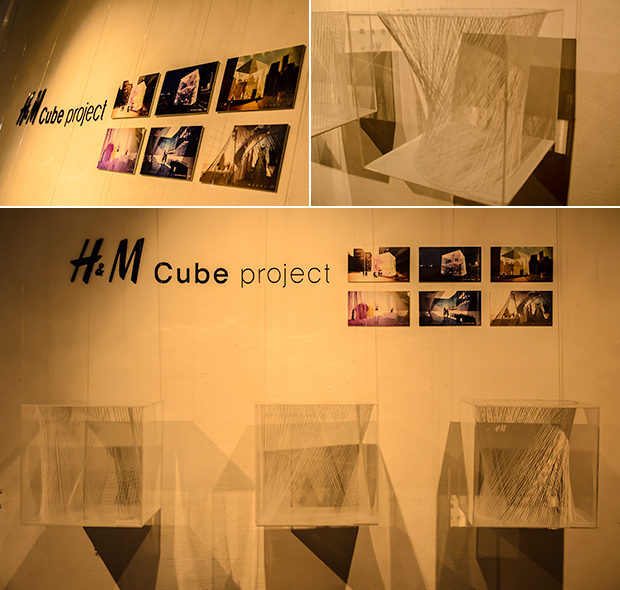 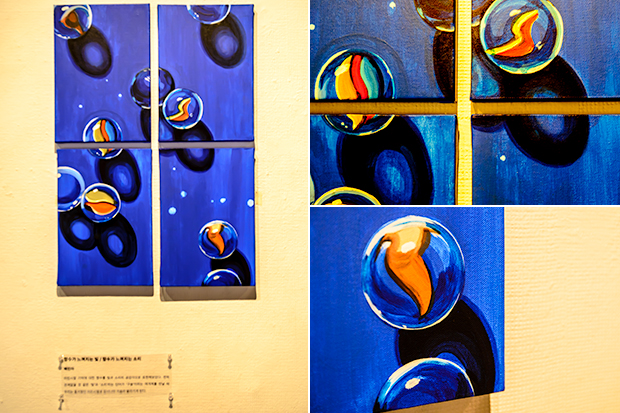 I expressed nostalgia for my childhood memory with light and sound. If two words ‘light’ and ‘sound’ are synthesized with means like ‘beads,’ we can be brought back to our childhood days through our memories. 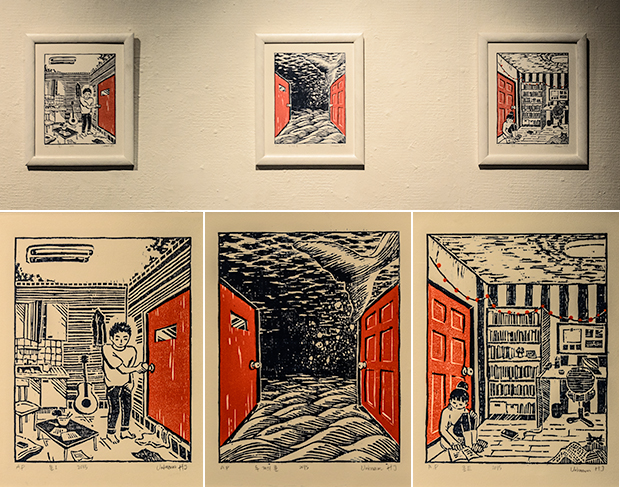 Harmony and coexistence are often considered as words that represent a state of peace. When I prefer to be alone, I feel those two words oppressive and violent. Is ‘being together’ good all the time? The one thing I can be sure of is that ‘being together’ is not the same as keeping oneself safe. The ‘door of mind’ is not a connecting door between persons but it is each individual person’s own door. Therefore, when two persons meet, there exist two doors between them. Only you can open your door, and two doors need to be opened at the same time to exchange minds. Opening a door means breaking free from your own world and creating a new world that can be shared with other people. This may just sound nice but worth giving a thought. When looking at your world that is like sandcastle washed away by waves of relationship, are you confident that you won’t regret the moment of opening the door? 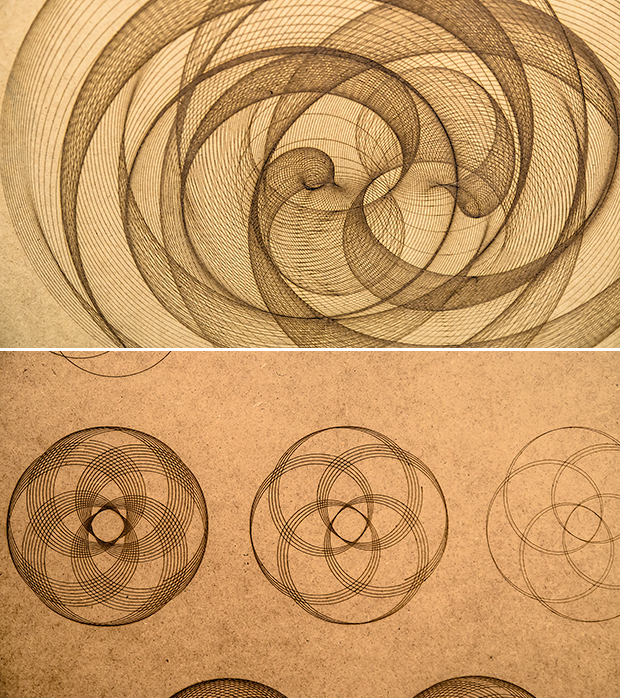 Patterns were designed by changing a fixed amount of line trajectories
according to the algorithm of multiple rotating axes. 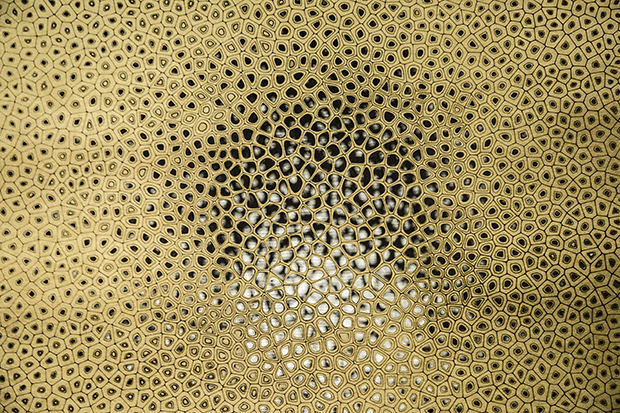 Using the parametric design, material’s physical properties
and structures of natural patterns were tested with the tensile force.
Design was made to test scalability to bigger structures

Upon entrance to the exhibition hall, a large piece of white drawing paper and a big pencil could be seen. This work was [Poem for you and me; Each person’s status recognized by selection by Hong-Seok Kim]. This was completed by an artist and visitors during the exhibition period. There were many writings on the drawing paper but you may not be sure if any of these writings was about you. Examples of these writings were: Cain and Abel; sadness and nothing; things that are forgotten and not remembered at all; things that are clear and ambiguous; things that are cursed and cursing; things that are revered; things to support; excitement and touchy feeling; travel and development; chaser and the person being chased; believing and deceiving; endurance and hurting; etc. Let’s complete sentences with more meaningful expressions. You may think that other people may be very different from you and me. But, when you participate and share outcomes, you will be surprised by straightforward expressions and various stories.

Andante: The aesthetics of slowness, exhibition of the juniors from the Department of Metalwor…