How Are Our Foreign Students Doing? 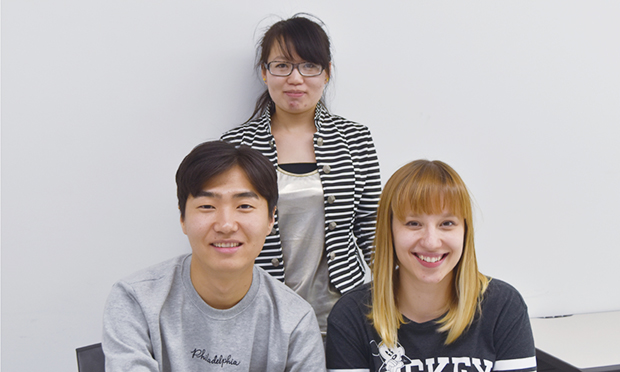 2. How did you come about coming to Korea?
Zheng Chang Qing: Initially I came to Korea to study advertisement, but my mind changed as time passed by. I now want to study more about Korean language.
Vyshemirskaya Olga: I originally came to Korea to study at the Korean language school in Kookmin University. After completing my studies at the language school, a teacher recommended me to pursue further studies in the graduate school. Hence, I am currently studying communication science in Kookmin graduate school.
Zhao Tong: I majored in Korean in China, and the reason for my stay in Korea is because I thought that it would be useful to have overseas study experience in Korea.

3. What do you think were the benefits of your stay in Korea and were there any difficulties that you encountered in Korea?
Zheng Chang Qing: The local people are very kind and have great manners. Since Korea is geographically smaller than China, it is very comfortable and easy to travel to diverse places.
However, the hilly terrain makes me tiresome.
Vyshemirskaya Olga: I think it is comfortable living in Seoul. Seoul is a safe place and the prices are lower than Russia. In Russia, people usually meet friends at home, but in Korea, people hang out outside more often which I think is great. For the downside, I sometimes feel uncomfortable because people are physically too close to me. In Russia, the houses are constructed so that there are gaps between houses and there are fences around houses. In Korea, there are no gaps between houses which I think deprives of my private space.
Zhao Tong: In graduate school, both students in the masters and doctors programs can enroll in same lectures. So the skill differences among the students are great and that can make the classes more difficult.

5. How do you spend your spare time?
Zheng Chang Qing: I play soccer with Korean students and outside of school, I play with Chinese students.
Vyshemirskaya Olga: I love dogs, so I go to dog cafes with my friends. Also, I like to watch movies and I casually eat food with friends. I do not drink that often.
Zhao Tong: I like to watch Korean dramas so I watch Korean dramas often.

6. Do you have any extracurricular activity recommendations to Kookmin University students?
Zheng Chang Qing: I think it would be excellent to have a society club that is made up of both Koreans and foreign students. It would be great to provide opportunities for foreign students to get to meet and have relationships with the local students.
Vyshemirskaya Olga: I am satisfied with the level of activeness in Kookmin University. In Russia, students simply study and there aren’t that many society clubs to join.
Zhao Tong: I want there to be a society club for graduate school students to join.

To better utilize the Sungkok Library