It was a journey of hopes and dreams when I flew from Kerala, India to Seoul, South Korea. After landing at the Incheon International Airport, I informed my professor about my arrival and he told me to take an Airport Limousine Bus to Jeongneung. I somehow managed to get a bus to Jeongneung but was unable to update my bus status to my professor, and as my phone card was used up I couldn’t make a call to him. The mesmerizing view of South Korea took me to another world, but the question of how to reach Kookmin University shattered my thoughts.

An hour later, I could see my bus passing through a long tunnel after which I saw the breathtaking view of the Kookmin University campus. The bus moved for few more minutes and the announcement helped me to get off at Jeongneung. I felt very strange in Jeongneung; everything around me was written in Korean, a language which I am totally unfamiliar with, and unfortunately I couldn’t find any telephone booth and the cold climate was making me shudder. After standing at the bus stop for a few minutes, I decided to walk to a nearby shop for some assistance.

I enquired from a guy in the shop about how to get a taxi to Kookmin University, but he was unable to understand English. As I was lucky, he understood that I was asking something about Kookmin University. Then I tried to make him understand more with some actions and English words but failed miserably. I borrowed his phone to make a call to my professor, but unfortunately the call didn’t go through and I was in an utterly terrible situation. I sat there for a few minutes thinking about what my next step should be, then the shopkeeper came near me asking to see my passport. I gave it to him and he then called the Kookmin University office with the details written in my passport, but he was unable to get any information which was useful to me.

I could see the tension reflecting from his face as he asked me to accompany him. I followed him and he entered a police station and started to talk to some police officials. I was a little afraid with the thought of why he took me there, and even wondered whether my first day in Korea would be spent in jail. The police officer talked to me, but there also language played a crucial role. I was not able to understand him and he couldn’t understand me either. The police officer then had a look at my passport and checked my visa, after which he handed it back to me. He then continued talking to other police officers in an up and down modulation. I couldn’t understand their conversation, but realized that the shopkeeper took me there to seek some help.

After coming out from the police station I took another chance to make the shopkeeper understand that I wanted him to arrange a taxi for me, but my efforts made him even more confused. I stood outside his office and was totally desperate. By this time, he had gotten his car and asked me to get in with some actions and saying something in Korean like ‘Kookmin Deyakiyo.’ By hearing Kookmin I understood that he was offering to drive me to Kookmin University. Initially, I thought for a moment whether to accompany him or not, but since I was convinced of his intentions, I decided to go.
On the way to the university he tried calling my professor once again and luckily we got him over the phone. When I was connected with my professor, I informed him about my status and immediately felt relieved. By the time I reached Kookmin University, my professor’s students were there at the gate to receive me. But before letting me enter the university with them, the shopkeeper talked to my professor once again to confirm the intent of his students, and once he was satisfied, he let me go with warm greetings. In the end I was very happy and felt a sort of respect towards this man. I was astounded by the attitude of Koreans and realized how well they treat foreigners. This was my first impression about a Korean in their land. Later, I presented that man with a gift, so that he could extend his circle of compassion for all human beings beyond the boundaries of his nation, language, culture and color. Following this, I have had several more good experiences with Koreans on different occasions that have made me feel great about these people.

Now I feel that South Korea is like my own country and the only differences are in food, climate and culture, which I believe can be adjusted gradually. In this busy world where all are being selfish in their needs, I think Koreans are true role models for people in other countries to follow. In my view, even though South Korea is becoming a pioneer country in the field of advanced technology, it is the warm people in South Korea that make the country a more global community. 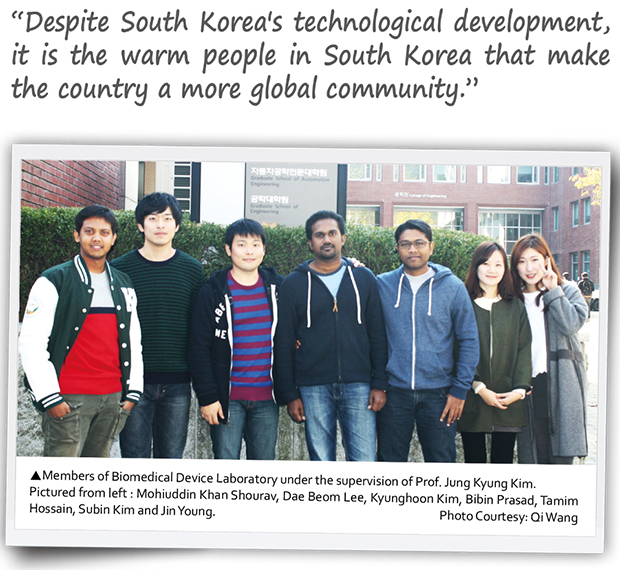 How Are You, Foreign Students?

Wanna stand out amongst all? The Importance of Humor in Presentations