As my wife and I planned our trip to the Philippines for this winter break, we had the idea of spending time with her family in Mindanao, going to the beach, visiting her former university campus, taking a trip to Mindoro, and just relaxing and enjoying the warm weather.  We also had our hearts set on seeing all the Christmas lights around the Philippines as Christmas is a much more popular holiday there than it is here in Korea. We had purchased our tickets in May, as there was a great promo at that time, even though our trip would not be until December.  Little did we know at that time that the name Pablo would change our plans drastically and impact the lives of thousands around Mindanao.

Shortly before our scheduled departure date, Typhoon Pablo set down on Mindanao, Philippines, in areas never before struck by typhoons, and caused immense damage in many regions of the beautiful island.  Because this was a place never frequented by typhoons, most of the structures were not designed to withstand extremely strong winds, and thus many of these structures were leveled to the ground.  In the province of Compostela Valley, there were huge areas where everything was not only destroyed, but because of the rising floodwaters everything was completely washed away. And to compound the situation, there had been a lot of illegal logging and mining in that area, so mudslides also played a major roll in the devastation. 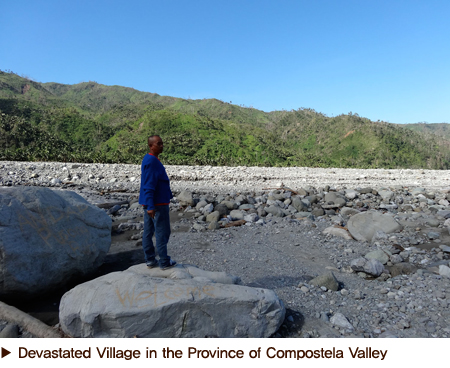 In the photos, taken one month after the typhoon, one can only begin to get a glimpse of the total devastation that took place in that valley.  In the photo with my wife’s brother standing by what looks like a dry riverbed, this entire area was once a complete village!  The entire village ? houses, a school, businesses, a health center ? was not only destroyed, but everything was washed away by water and mud, leaving nothing but boulders lying in its place.  Close to one thousand perished in the Compostela Valley, but we thank God that no one from my wife’s family living there were among them. 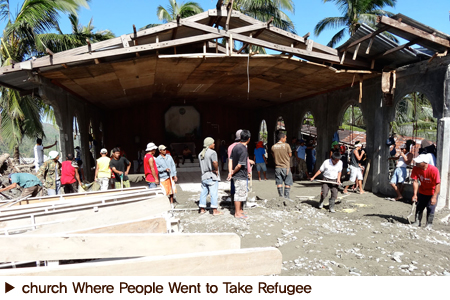 There was a church in the path of the rushing water, mud and debris where many people went to take refuge. As the waters rose and threatened to overtake the church, suddenly something fell from the top of the church that diverted the water and mud away, saving all those who were inside.  In the photo with the yellow, red and white chairs, this is the house of a church family whose father had been paralyzed years earlier by a stroke. He had been a faithful elder in his church and a devoted man of God. In the rush as everyone in the area struggled to save themselves, this family was forgotten. The wife prayed for their lives to be spared, knowing that it would be impossible to carry her husband to safety in the intense storm.  Miraculously this was the only house left standing in that area!  People were amazed and exclaimed that God really loved them because He not only saved them, but their modest home sustained only moderate damage even with trees falling all around and even on their roof. 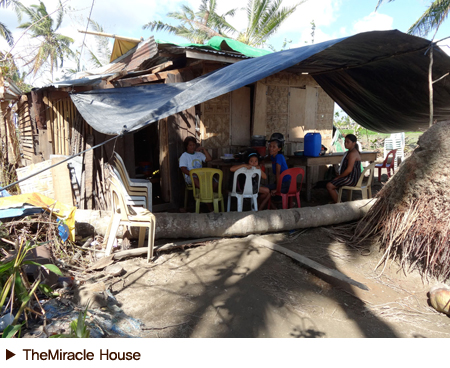 Closer to my wife’s home, because it’s an elevated area, the damage was much less than in Compostela Valley. Families mostly suffered from roofing ripped off their homes and from fallen trees.  There was no electricity in her home for the first 6 weeks of our trip ? although this is nothing compared to areas that still have no electricity!  Fortunately we had sent money ahead and they had prepared a generator using a motor from an old piece of farm equipment, so we were able to have electricity during the night hours. But instead of going to the beach, we spent time clearing downed trees and repairing roofs. And just before we arrived, we found that my brother-in-law had fallen from a roof while making repairs and broken his shoulder.  This had not exactly turned out to be the relaxing vacation we had envisioned! 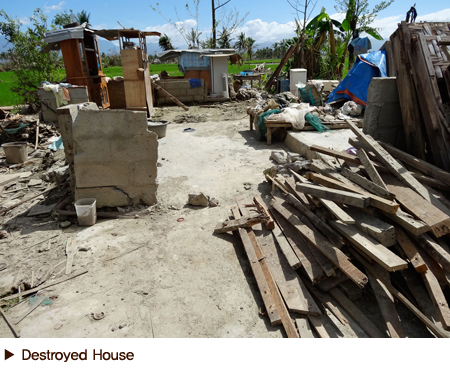 But through it all, we spent good quality family time there and learned to appreciate the finer things in life.  My wife’s cousin’s family was spared even though they had to flee in chest deep water with a newborn baby.  After fleeing for his life and taking nothing but his family, her cousin said he realized that acquiring things was not what was important in life.  Through all the tragedies, no one in my wife’s family lost their life and for that we are thankful.  And we found that helping others, even at great expense, is a rewarding and gratifying experience that will not quickly be forgotten.  So even though we did not set foot on the white beaches of the Philippines, we had encounters that will stay in our fond memories for a long time.  We also grew to recognize the value of electricity, high speed Internet and hot showers; normal things here in Korea that we often take for granted.  And we are most thankful for those finer things in life ? things that will never be destroyed ? things like family, love and hope.

The Trouble with Western Logic / Christophe Gaudin (Dept. of Political Science and Diplomacy) …