First I want to congratulate Korea for hosting the successful Nuclear Security Summit (NSS) 2012 which was held on 26th and 27th of March. This summit with the theme of “Beyond Security Towards Peace” enhanced the Korean position in the world. The nuclear program of North Korea and the recent Fukushima nuclear accident have heightened the nuclear sensitivity in the East Asian region. Recognizing these current situations, Seoul is the right place to discuss the issues related to nuclear security.

There are 53 heads of state and government, as well as representatives of the United Nations (UN), International Atomic Energy Agency (IAEA), European Union (EU) and INTERPOL, attended the 2012 Seoul Nuclear Security Summit. Compared to the 2010 Washington Summit, there were seven new participants: Azerbaijan, Denmark, Gabon, Hungary, Lithuania, Romania and INTERPOL. The EU was represented by both the President of the European Council and the President of the European Commission, making the number of participating leaders 58 in total.

As a delegate of India, I participated in the Model Nuclear Security Summit (MNSS) which was held in Hankuk University of Foreign University (HUFS). I discussed various issues like nuclear weapon, nuclear terrorism and nuclear energy. I got this chance to become an Indian delegate from the Indian embassy. It was a good experience to meet many leaders and officials during this summit. The 2012 Seoul Nuclear Security Summit shows Korean government is keen on solving the problems of nuclear threat in the world and East Asia. 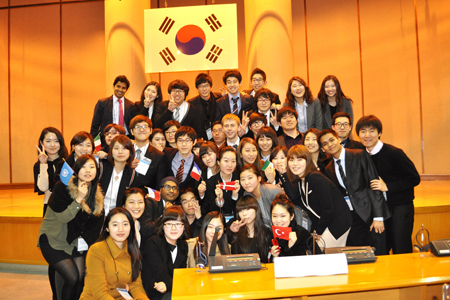 There are many significant achievements from the summit. The United States put into effect the Plutonium Disposal Agreement signed with Russia on the disposal of 68 tons of plutonium. Ukraine and Mexico accomplished a total "cleanout" of all stockpiles of HEU just prior to the Seoul NSS. For strengthening the Nuclear Security there are 14 countries that have newly ratified the International Convention for the Suppression of Acts of Nuclear Terrorism (ICSANT), increasing the number of states party to the Convention to 79. The Countries like Belgium, Canada, Denmark, France, Japan, the Republic of Korea, Norway, Netherlands and the UK, have pledged contributions to the IAEA Nuclear Security Fund for better and safer world.

The Seoul NSS 2012 brought a focus on nuclear security and it is high time to control the nuclear danger from world. The Fukushima accident forced the world to re-think about nuclear energy and its safety. Many developed and developing countries agree to reduce the nuclear plants and consider alternative sources of energy. There is a renewed need to work together to reduce the nuclear danger. The members of 53 heads reaffirmed the shared goals of nuclear disarmament, nuclear nonproliferation and peaceful uses of nuclear energy through the Seoul Communiqué. The United Nation, IAEA and INTERPOL are taking on bigger responsibilities to free the world from nuclear danger. All nations should support these organizations for better and safer world.

Xenophobia: There is no fear without reason.

Empowering Women in All Fields?