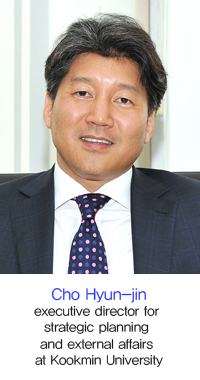 Last year marked the 60th anniversary of the end of the Korean War. But too few people in foreign countries knew about this.

Cho Hyun-jin, executive director for strategic planning and external affairs at Kookmin University, believes it was just one of many wasted opportunities to promote Korea overseas under the Park Geun-hye administration.

"It was a symbolic year, which would have had an even bigger publicity effect than the Asian Games," he said in a recent interview. "Think about it: the same generation that walked with cows in Seoul's Gwanghwamun in the 1960s now walk around the area with smartphones."

"It is a dramatic development story. And we could have promoted it in many ways such as advertising it in international newspapers or having special events for ambassadors to Korea … It was an opportunity wasted."

The former press officer in charge of foreign media at the presidential office was one of the key figures who organized the G20 summit in Seoul in 2010, which he thinks opened a new chapter for overseas public relations by the country.

"It was a meaningful event in which Korea conveyed a message to the world that we can now play a leadership role," he said. "Yet nothing on such a scale has followed since."

Among many problems in managing the country's PR overseas, he noted, the biggest one is that the government does not seem to have the big picture of what it wants to do with it.

"Former President Lee Myung-bak had the slogan of ‘Global Korea,' while the Roh Moo-hyun government aspired to make the nation a ‘Northeast Asian economic hub,'" he said.

Under Kim Young-sam's tenure, Korea joined the Organization for Economic Cooperation and Development (OECD) in 1996. And Korea held the FIFA World Cup jointly with Japan in 2002 under the Kim Dae-jung administration, he added.

"But what now? There seems to be no clear purpose or philosophy in it," he said.

Another issue is a lack of communication with foreign press.

He said one of the indications of the dwindling communication is that only three ministers visited the Seoul Foreign Correspondents' Club in the first year of Park's presidency, compared to six under Lee's first year.

"Foreign press is where the PR starts," Cho said. "Government officials should communicate more with them."

He also pointed out that the current administration is understaffed in foreign press handling.

Yu Myeong-hui, the current spokeswoman for foreign media in Cheong Wa Dae, is the only one officially dealing with this.

The situation was better previously; former President Roh had a secretary and assistant staff assigned to foreign media; so did his predecessors Kim Dae-jung and Kim Young-sam.

The competition for PR among developing and developed countries has only become more intense in recent years, he said. "Government officials might complain that they lack resources, but I believe it is rather a matter of the leader's will."

After studying economics at Clark University in Worcester, Mass. , Cho started his career as a reporter at YTN. He worked there for about 10 years before moving to Arirang TV, an English-language network based in Seoul.