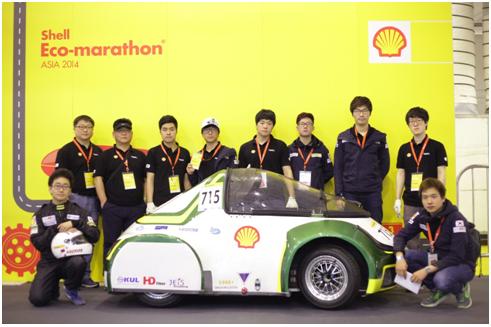 Kookmin University's automobile club KORA and the representative team from the Korea University of Technology and Education attended the 2014 Shell Eco-marathon Car Race on February 9 in Manila, Philippines. At the event, the KORA team won third place, as reported by Shell Korea on February 11.

The Shell Eco-Marathon Race is hosted by Shell Corporation every year in three continents (Europe, North America, and Asia), and is a car race event participated by students 16 years and older.

The Asian race held its fifth competition this year in Manila, Philippines for three days, from February 6 to 9. One hundred nine teams from 15 countries across Asia participated in the event. The Korean participants included Kookmin University's KORA team and a team from the Korea University of Technology and Education, both selected through a domestic selection match.

KORA was awarded third place for urban concept electric cars, which competes in fuel-efficient vehicles for practical use, while the team from the Korea University of Technology and Education ranked seventh for prototype gasoline cars that maximize fuel efficiency through innovative design. This was the first year where Korean representatives entered the ranks.

According to Shell Korea and Hankook Shell Oil, the corporations have been sponsoring students partaking in the event since 2010. The Korean teams use the funding to research and manufacture their respective automobiles for a year.

"I was pleasantly surprised by the genius and dedication of the hundreds of teams who partook in the eco-marathon event," said Christopher Gunner, the CEO of Shell Korea. "I hope more teams from Korea will take part in the event next year."

The Ministry of Land, Infrastructure and Transport Commendation for Overseas Construction / Pr…