VMS developed by Kookmin University, promotes the university by being installed in Seoul Metropolitan City 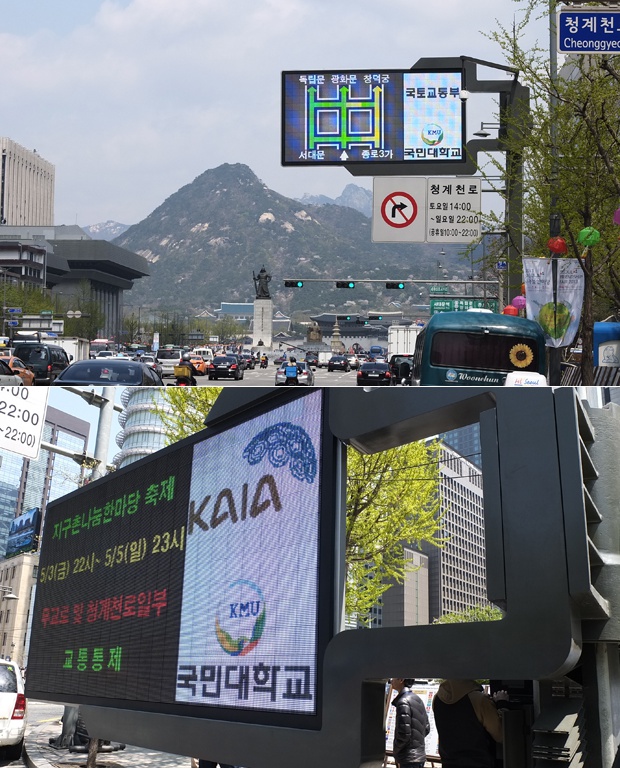 The intelligent multifunctional variable message sign (VMS) that was developed by the research team of professor Jun-seok, Park (College of Electrical Engineering & Computer Science of Kookmin University) is currently installed in Gwanghwamun of Seoul. As it shows the emblem and logo of Kookmin University, this newly developed VMS also serves as a promotional material for the university. In addition, two more signs are being constructed in Namyangju-si and these will be operated after their completion by the end of May.

Developed with the support from the Ministry of Land, Infrastructure, and Transport and Korea Agency for Infrastructure Technology Advancement, VMS was designed to improve the issues raised in the conventional VMS, such as enlarged structures, deteriorated visibility, inconsistent information, and shadow areas of traffic information, by focusing on places where there is a need for installing a new VMS. Currently, it is being operated at Gwanghwamun for technical assessment through on-site application.

The intelligent multifunctional variable message sign that was developed this time is a high-tech electronic display board that was produced by the research team of professor Jun-seok, Park of Kookmin University to enhance the domestic traffic environment to the level of advanced countries. Such project was realized after about three years of development with an investment of 9 billion won in R&D expense. It is composed of six types including figurative type that innovatively reduced the thickness and weight of the exposure side, integrated type that displays both directional signs and traffic information in advance, and mobile type that enables the provision of event information.

The Director of the Road Traffic Authority Yong-geol Yi said, “With the application of the outcome derived from the research on VMS, it is possible to solve pending traffic issues as well as provide a measure to develop a profitable business in use of the VMS. We are confident to reap various benefits from this new device.”