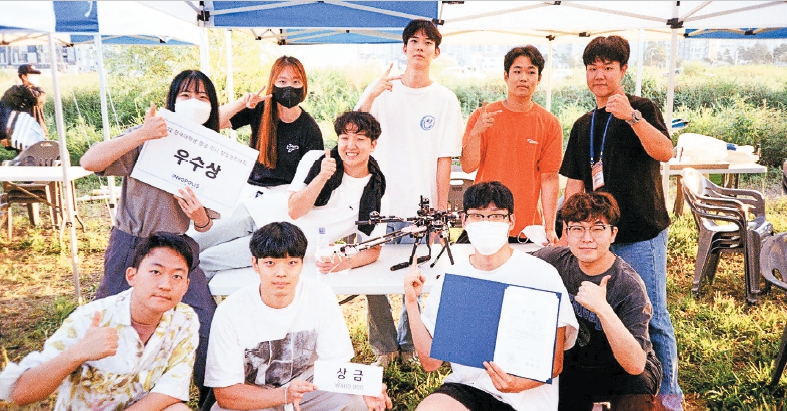 Krone, a club of Kookmin University (KMU)’s School of Mechanical Engineering, won two prizes at the 2022 Creative Aircraft Competition, with one Krone team participating in each category of the competition. One team won first prize in the aircraft category of the competition, which was hosted by the Korea Innovation Cluster of Gyeongsang National University. The winning students are Choi Jong-Bum, Kim Tae-Yoon, An Soon-Min, Min Ji-Hong, Lee Jae-Yung, Cho Seung-Hui, Lee Yung-Ha, Pyo Ji-Hye, Goo Seo-Hyun, Kang Min-Soo, and Gook Joo-Yeon.

“Krone” is a compound word comprised of the “K” from KMU and “drone.” Because there is no aviation major at KMU, the club consists
of students of the School of Mechanical Engineering who are interested in aviation. Aircraft can now be categorized as manned and unmanned Krone is divided into two groups based on the types of drone wings: the fixed wing group and rotorcraft group. Krone is led by professors Kim Tae-Woo, Lee Kun-Sang,
and Yoon Yong-Hyun.

Formed in 2015, Krone members have won several prize so far. In the rotorcraft category of the same competition, they won first prize in 2019, first prize in 2020, and first and second prizes in 2021.