Flying cars and hologram screens, like the movie Back to the Future, are one of the things that we imagine when we hear the word ‘future’. Everything will be automated to minimize the cost risked by humans in the future. This phenomenon is called the Fourth Industrial Revolution, which is a global-scale Renaissance of technology especially for robotics and Artificial Intelligence. Since the world now acknowledges automation as a big part of global business, Seoul, one of the world’s modernized cities, affords an example to other nations to show what it is like to be a part of the future.

Digital Seoul Forum, held by Seoul Digital Foundation, has participants mainly composed of citizens who are willing to share ideas that will brighten Seoul’s technology. This year’s participants, who brought great ideas to the forum, included Kookmin University’s finest students. They won an award at the forum as a team of three people with the topic of ‘How to resolve fine issuing by not tagging bus cards.’ The general problem is that there is a total loss of 6 billion won from citizens just because they did not tag their cards when getting off the bus. To resolve this problem, three students have brought the idea that could be used in the future. The following is an extract from an interview with two students: Su-In Park and Da-Sol Lee who participated as members of a group of three people at the forum. They are currently senior students of the mechanical engineering department and are expected to graduate next year. 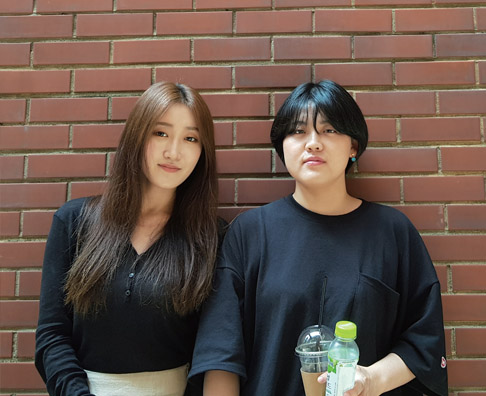 Q1: How did you participate in the 2018 Digital Seoul Forum? 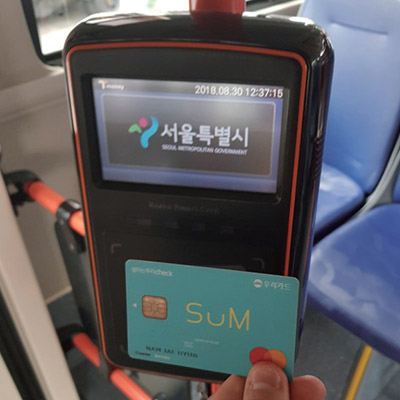 Su-In Park: “We were already dealing with the topic of ‘resolving the problems of fines that occur from not tagging bus cards when getting off’ for our study called ‘Capstone Design,’ which is a senior year class project for mechanical engineering students. While we were in the midst of working for our project, we realized that the requirements of this forum matched the fundamental purposes to the project, which is to make improvements in the public system of Seoul. It was a coincidence that we found out about this forum.

Da-Sol Lee: “Our teammates are the same teammates in our project from Capstone Design. We have known each other since our freshmen year and the other student, Sung-Joo Kang, joined us during the Capstone Design class project. Since our project was about buses, we decided to go with the name ‘Busta Busta’. Even though it is pretty name, and we didn’t expect to win the forum with that name.”

Q2: What are the exact problems of not tagging a bus card when getting off?

Da-Sol Lee: “The bus card company or the Seoul public transportation system thinks that you got off the bus at the final bus stop if you do not tag your card. It is necessary to tag your bus card when getting in because you need to pay for your basic fees. However, the Seoul bus system works with the distance you traveled. For instance, if you exceed a certain distance, you will start getting charged with extra fees. If you do not tag your card, the system will charge extra fees equal to the amount as if you traveled to the final bus stop, which is equivalent to the maximum fee.”

Su-In Park: “The whole point of tagging your bus card when getting off is to make sure where you are leaving. If you pay the same amount of money with another person even though you traveled less than him or her, you are not treated equally. That is why the Seoul public transportation system relies on traveled distances.”

Q3: What were your solutions to this problem?

Da-Sol Lee: “Our purpose was solely resolving the problem of paying extra fees when not tagging, and to figure out the whole problem, as we knew that there was a need to fix the system. However, that is something out of our hands, which our professor also agreed on, so we decided to do what even normal citizens can also do. Our solution was to put the data of the time and place into the database of the public transportation system by using smartphone apps.”

Su-In Park: “In detail, we thought of attaching QR codes to each bus stop. If someone finds out that he or she did not tag his or her bus card, the person can scan the QR code attached to the bus stop which will help determine the user’s GPS data, approximate time of when he or she got off the bus, and other data if needed.”

Q4: Were there any other possible solutions that you thought of?

Su-In Park : “To be honest, there were other case studies that dealt with the similar problem we were doing in our project. For example, there was an idea of installing card readers at every bus stop to tag bus cards, but we thought ours was the best in terms of being a cost-effective solution.”

Q5: What was the relationship between your Capstone Design class and this forum? How did you choose Professor Jay- Il Jung (current professor of Capstone Design) as your advisor?

Da-Sol Lee: “There weren’t any direct relationships between Capstone Design and this forum. Capstone Design is a class in which you design a project over a semester based on what you have learned over the past three years of mechanical engineering and then display it at the end of semester's competition. Your grades are based on what you receive at the competition. I would say there is no direct relationship to the forum whatsoever, since making smartphone applications is something you don’t learn from four years of mechanical engineering nor from this class; but since we were doing a project from Capstone Design, we were able to find out about the forum so it somehow helped us get engaged into it.”

Su-In Park : “Our mentor and advisor Professor Jay-Il Jung is very passionate for students and truly cares about their future careers. He helped us in many ways in terms of planning, setting a specific goal for our project and how to deal with problems like patents, which students are not usually fond of. We thought we could get some help from the professor, and that is how we chose our advisor.”

Q6 : What were the strengths that made you win the forum compared to other teams who were also a part of the competition?

Su-In Park : “One obvious strength was that our topic had a vivid problem. By vivid I mean that it is realistic in terms of financial problems that people are losing 6 billion won every year due to not tagging bus cards. Other teams were mostly concerned with problems that were abstract, something not as desperate to be solved as ours. There were other good ideas as well, but ours seem to have the most interest from both the citizens and the government.”

Q7: What were the difficulties that you faced while preparing for this project?

Da-Sol Lee: “I thought our job was mostly done after choosing a topic. It was so hard to find the main topic that we were relieved at some point. However, as we decided our main topic, we found out that there were already so many attempts by others to solve this problem. The hardest part was to try and find a solution that no one had ever dared to think of. It is almost impossible to come across a completely new idea, and we were trying to look for one. We managed to find a solution at the very end of our preparation period, checking other’s ideas to the solution to see if they overlapped too much.

Q8: What kind of advice would you give to the future senior mechanical engineering students who might join this forum?

Da-Sol Lee: “It is very important to know how to challenge. It occurs very often to students who lose their motives so easily. There might be thousands of people who have already attempted to give an answer to the same problem that you are willing to solve. However, no one asks you for a groundbreaking and epochal method. If you are able to give an answer at your own level, it will be sufficient for most of the cases.”

Su-In Park : “You need to embrace the subject itself. I have seen so many people hating mechanical engineering but keep on studying it. That won’t last long when you become a senior.” As we understand from this interview, the three students have worked very hard preparing for the forum, and it could proudly be said that these students are a part of the bright future of Korea’s digital technology. Congratulations to the three students; Su-In Park , Da-Sol Lee, and Sung-Joo Kang.