Did the picture on the cover page baffle you? For those who do not have a clue what the package is, the chosen cover ‘model’ for this issue might seem quite random and confusing. Well, the package shown in the cover page is called a ‘Welcome Kit’. Some might be familiar with what the ‘Welcome Kit’ is, since it has been introduced through some influential forms of media, including Pikicast and the Hankyoreh news. However, for those who still have not heard the buzz yet, this issue’s interview is dedicated to uncovering the ‘Welcome Kit’ and its creators. To give you some idea on what the ‘Welcome Kit’ is, it is like a welcoming fruit basket, where the kit is composed of a cartoon, a manual, some stickers, a USB, and a badge. The said kit was created by the group called Openfeminism, and they teamed up with the college of designs’ student council which led to the successful distribution of the kit to incoming freshman who are admitted to the College of Design this year, 2017. 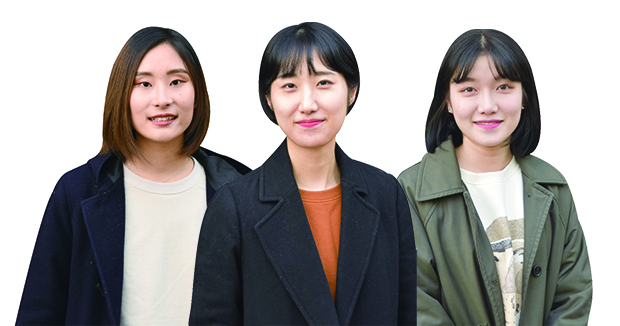 Tell us about the group, Openfeminism
Openfeminism is a group under the College of Design, where we study and practice feminism. We created the group in September of 2016 after having a talk show event organized by the Visual Design Department called, <Openfeminism part 1, 2>. To go into detail about the talk show event, the event was extremely successful in uncovering the unfairness of sex, and sexual harassment cases not just limited to the school environment but also in the real design industry. What started out as a small talk show, snowballed in to an open exposure battle and we were surprised by how impactful the event turned out to be, affecting not only the students in the design college, but also people who are currently working in the design industry. After the impactful event, we wanted to expand our gathering to be able to communicate with a bigger, and diverse crowd, so our group branched out to be under the whole College of Design. 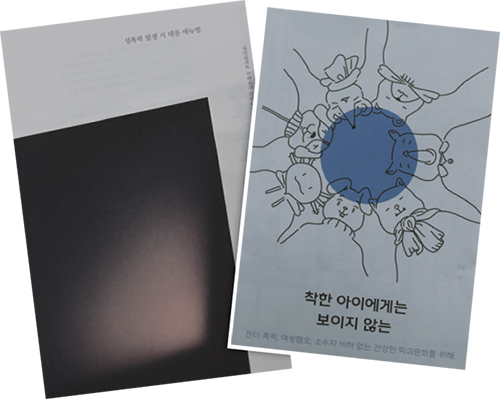 Manual to defend against sexual assaults / Cartoon about gender issues

What was the motivation behind the ‘Welcome Kit’
The Welcome kit came about from the movement to recognize and reflect on the omnipresent misogyny that exists in the department. However, we thought that if such recognition is only shared limited to the department’s current members, the change that could occur would only be temporary. In other words, we were firm on the idea that even though there might be a glimpse of change for the better, misogyny would not be rooted out if the change were not continuous. With that said, we actively communicated our messages to new members regarding the movement to eliminate the misogyny that exists in the department and also help them to recognize misogyny. Overall, we hoped that this humble start could possibly eradicate the existing misogyny, and this hope and passion led to the idea of the ‘Welcome kit’. 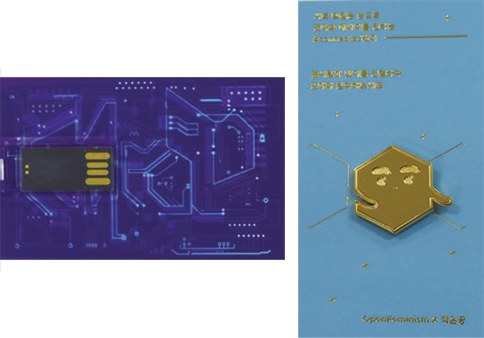 What was the start of creating the ‘Welcome Kit’ like?
We did not have any specific plans, but just had a vague idea of wanting to create something that could help organically melt in the feminist culture of the departments. It was not until the second semester of 2016, on September 8th, that we came up with the ‘Welcome kit’, and the first two contents that we had in mind were only the manual and the cartoon. Even though it started out as a small idea by a small gathering, we were able to grow the idea to the ‘Welcome Kit’ that we managed to produce, by the recruitment of new people who actively chipped in various, novel ideas.

What was the process of creating the ‘Welcome Kit’ like?
We started recruiting more people since last semester (Winter 2016) and we had our plan set out around the end of the year. We had grouped participants by what they want to make, so we had the manual team, video team, goods team and the cartoon team. Our plan was to decide on the contents inside the kit and the direction of the design three weeks prior to the New Year, finish the work two to three weeks after, and then finish placing the order. Overall, we think the plan was slowed down by about a week compared to our original plan even when each of the groups had at least one meeting per week. At the end we were able to place the order on the second to third week of February. The overall project manager coordinated the progress of the divided teams, giving advice to each team and also making sure the project was getting done in the set timeline. Furthermore, one person from each different team was included in the group's chatroom to check on how the teams were expanding the ideas. By the mid-checkup meeting, we also prepared progress reports for the student council. 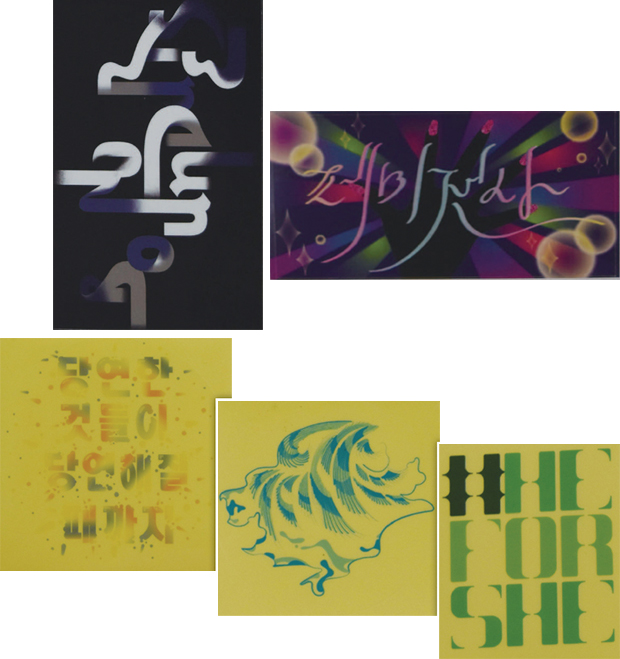 What was the reaction like, for the ‘Welcome Kit’?
The overall reaction was positive, we would say. We were thrilled to have our work shared by those who welcome what we do, and also having a newspaper article be written about our work. There were a mix of moving reactions and also interesting reactions and we did welcome feedback, but we think people with negative opinions did not bother to give any. In a nutshell, all reactions were a big support to us.

What are the future plans for Openfeminism? Any projects in mind?
Since we are a group inside the College of Design, every member has talent in this area, so we plan on taking those talents and create new contents by exhibitions or workshops. Furthermore, we plan on actively connecting with other schools or institutions. Our aim is to not be limited. Furthermore we would like to get in contact with other universities and departments as well!