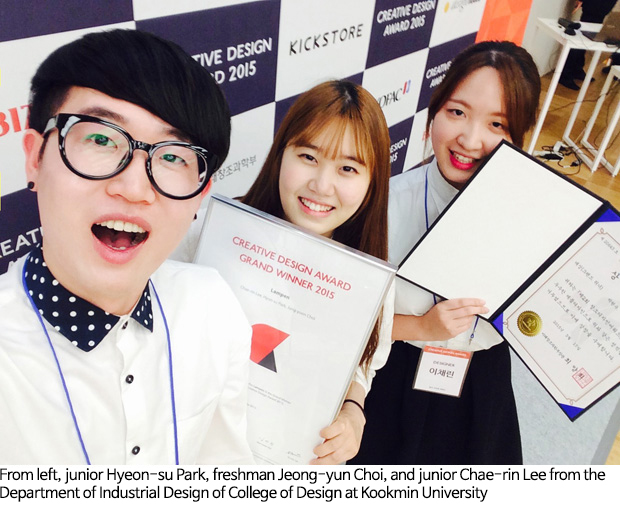 The 2nd Creative Design Awards was sponsored by the Ministry of Science, ICT and Future Planning and supervised by Maque Korea. The team composed of juniors Hyeon-su Park (Class of 2010) and Chae-rin Lee (Class of 2012), and freshman Jeong-yun Choi (Class of 2015) from the Department of Industrial Design of College of Design at Kookmin University participated in this event. The team’s contest entry was a semi-permanent electric bulb ballpoint pen called “Lampen” that can be charged by shaking. This creation was awarded with the Grand Prize (Minister’s Award). On the other hand, Jeong-hyeon Park (Class of 2013) presented a multifunctional foldable chair called ‘H Lobby Chair’ and was awarded with the Bronze Prize.

Hyeon-su Park revealed the ambition and purpose of his design by saying, “After watching a short documentary film called ‘Blackout,’ I was inspired to design Lampen. Beyond the concept of a mere light, it reflects the will to light up the future of third world children such as Guinean children featured in the documentary. I still have many things to learn since I am still a student, but I want to study the field that can solve many problems through design.”

Regarding the marketing strategy of Lampen, the team of the Department of Industrial Design suggested the ‘one for one’ method that pursues both economic values and public values through consumers. It emphasizes that buying a Lampen is not only a gift for oneself, but also, benefits the children from third world countries.

The 2nd Creative Design Awards was held from April 8th to May 5th.Among 320 artworks submitted through the homepage of Creative Economy Town (www.creativekorea.or.kr), the final 9 pieces out of 13 nominees that went through the first and second screenings were selected and announced. The awarding ceremony was held at the Dongdaemun Design Plaza located at Jung-gu, Seoul, Korea last May 17th.

The ‘Creative Design Awards’ is held twice a year and the third event will be held this coming November.