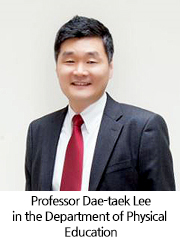 The project group of Kookmin University (leader: Professor Dae-taek Lee in the Department of Physical Education) was selected as an organization that will execute the university specialization program specialized in sports industry convergence supported by the Korea Sports Promotion Foundation and for 5 years, it will be granted approximately 1.2 billion won of business expense. Kookmin University newly established the Department of Sports Convergence for 2015 and the project promotion group will cultivate experts in sports engineering (masters in physical education or sports engineering).

There are 14 professors in the project promotion group including 5 people as Dae-taek Lee, Ki-kwang Lee, Joo-hyung Lee, Mi-young Lee, and Jung-gi Hong from the College of Physical Education and 9 people as Kun-sang Lee, Tae-woo Kim, Joo-heon Cha, Kee-sung Lee, Dong-hoon Shin, Jae-il Jeong, Si-Hyung Lim, Baek-kyu Cho, and Tae-ho Kim from the School of Mechanical Systems Engineering. The education based on the convergence of engineering and sports (physical education) is the idea of the project group.

The performance of a player in any sports competition including Olympic Games is the fair outcome realized based on the player’s ability. Also, the player’s ability can be decided by the equipment and supplies that he/she uses. In advanced countries like the U.S. and European countries, sports and engineering technology are being converged for the development of excellent sports equipment/supplies while employment/business that promotes connection between sports and engineering is widely established. In Korea, the attempt to converge sports and IT technology has been mainly promoted; thus, now is the time for convergence education that incorporates mechanical engineering to sports.

In addition, the professor’s team that participates in the project group was also selected in the 2014 University Specialization Program for ‘Human Technology Creative Talent Cultivation Project (Convergence of mechanical engineering and human movement science – leader: Professor Kun-sang Lee of the School of Mechanical Systems Engineering)’ and it will be granted approximately 1.2 billion won of business expense. In line with this, the College of Physical Education in Kookmin University opens a course of Sports Health and Rehabilitation from 2015 while establishing the Convergence Mechanical Engineering that will be opened in the School of Mechanical Systems Engineering. These courses are expected to serve a significant role for talent cultivation targeting the same goal as sports science in the undergraduate and graduate course.

The leader of the University Specialization Project (Professor Dae-taek Lee) has consistently promoted the research related to sports industry while obtaining contracts for the projects of the Ministry of Science, ICT and Future Planning.

The student startup team of Kookmin University, won the best award in the Global Student Start…