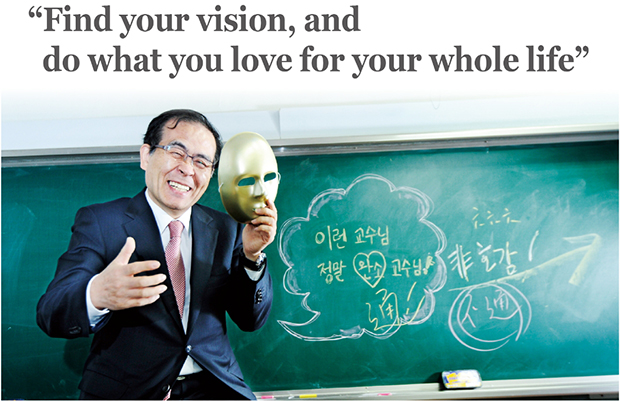 This year, KMU’s entrance ceremony created a big sensation for its meaningful events. The three main constituents of the school?students, faculty and staff? presented a choral performance after practicing intensively during the winter vacation. And, president, professors and notable alumni lectured about life plans and vision. It is Professor Eui-Yong Lee who came up with this unusual idea to hold an entrance ceremony that “breaks the mold.” Professor Lee had worked at companies for 27 years, taught at many universities such as Korea, Yeonsei, Chungang, and Daejeon before he was appointed as a professor of general education at his alma mater, Kookmin University, last year. He educates his juniors as a ‘vision mentor’ (a mentor who helps mentees to map out their visions) utilizing his knowledge and experiences that he gained from long years of working in real business world. In addition to teaching his classes, “My life, My way” and “Speak Confidently,” he is also an advising professor to a student club “CCC” (Campus Crusade Christ), and helps to hold the event, Passion Concert (Vision Speech Concert and Scout Me). The Kookmin Review went to his office and met Professor Lee who was busy with various activities after his classes, and listened to his story sitting around a table.

# Prof. Lee's University Days
To him, Kookmin University is a school that provided lot of value. Due to financial difficulties, it was difficult for him to graduate high school, and he managed to enter Kookmin University at a later age. That made him determined to “do his best during college years” and became more affectionate about KMU. He did many school activities very enthusiastically. The first thing he did was working at the student council. He was the head of a department in the student council. He also worked as a commissioner of Graduation Preparation Committee at KMU. He founded a student choir club and established Kookmin University’s English Newspaper, ‘The Kookmin Review.’ “I contributed a lot to school, and I earned many things, too. I can say that I spent my four years of university working hard and sincerely,” he said.

-You seem very talented and versatile. Generally, it’s difficult to be good at even one thing, but you are well-rounded.
“When I was young, I would think about what the future would look like. In the first place, I thought future world would need a multi-talented person, so I eagerly improved myself thinking about various fields, not just going deep down in one particular field. Of course, it feels like I paid less attention to study my major, but I improved myself, and developed multiple talents. For example, I developed my music interests and I also conducted music.”

# Prof. Lee's Career Path
-You opened a course titled “My life, My way” (인생설계와 진로, the course that students design their life, career path and find their future jobs) and you are playing a role as a ‘vision mentor’ in school. How did you discover your career?
“At that time, there was no one who could guide me or even to ask about my career. There was no career education equivalent to today’s career aptitude test which can help people to find careers that suit them the best. I just had to follow the way the world led me. I wanted to become a professor, but I didn’t know how to plan to be a professor and what to do. Nobody helped me, and there wasn’t anyone to ask.”

While he was thinking about his career, he happened to see a company’s advertisement at the school for a job vacancy. He got the opportunity to apply for a job by chance. He applied for it and passed. He started a life of a salary worker giving up his dream to be a professor for a while. However, the dream was still on his mind. But he worked enthusiastically, learned many things, and improved himself while working at the company by engaging in various activities including the choir.

“I was a successful worker. But at the back of my mind, I wanted to educate young people and mentor them, so I decided to study more.”

After getting a doctorate degree at Kookmin University, he got a teaching job offer from another university. He taught at other universities and KMU suggested him a professor job to teach the course “My life, My way.” He gladly accepted, and became a professor at KMU.

“Many students, even friends around me take life as it comes. I was very lucky to achieve my dream as if someone had guided me to attain my dream. As I did not have anyone to guide me, I want to guide students and make their process of trial and error easier. My future career will be pursuing my dream of being a mentor who can guide directions so that students can live their life better, rather than being a professor.”

# Speech Class "Speak Confidently" and Advice for Better Speech
Prof. Lee has taught speech class for more than 10 years. The difference between usual speech classes and his class is that it teaches students how to make ‘credible and trustworthy communication.’ While many speech classes focus on skills of speaking and speaking technique, the main objective of Prof. Lee’s class is to build up students’ ability to speak confidently · clearly · kindly.
“Speaking well means that a person can express their thoughts and feelings well including “thank you” or “sorry” and respond to people well. Building merely speaking technique is not a genuine ability,” he said.

-You’ve taught speech course for long time, and seen many students. What is your advice for students to improve their speech?
“The weakest point of our KMU student is lack of confidence. I could notice that students have difficulty in speaking not because of lack of skill sets but because of lack of confidence. My class aims to boost their self-confidence and self-esteem so that they can speak on their own.”

To practice speaking intensively, his students communicate even on weekdays via Kakaotalk and do their assignments that record their voices. He values communication between students and professors, so on the day of the interview with Review, he had an appointment to have a dinner with students taking the speech class after the interview.
“Speaking ability won’t get better if we practice sometimes. We should practice frequently, every day.”

# Message to KMU students
-Do you have advice to offer KMU students as a senior in school who went through life earlier?
Uncover your dream that can make you excited all your life. It is not about finding a work for now. You should find your exciting vision that you can do for your whole life. If you find your vision, you certainly can make your dream come true someday, even if it’s hard to realize your dream right now. In my case, I took a long way around to reach my dream. However, I don’t think taking the long way was meaningless. What we do are all meaningful. Everyday can be happy as long as we work toward our dreams we want.

-You mean do what you love?
Yes, after all, we should do what we love and what we are interested in. Everybody’s DNA is different and each person has unique interests and unique needs. Even though other people say “it is a good job,” it is not a good job unless it suits you.

-Today many people dream to work at conglomerates or be a civil servant.
It is not a good phenomenon. Popular jobs right now might be on the skids in the future.