Kookmin University KORA, ranked no. 1 in Asia in the Formula SAE 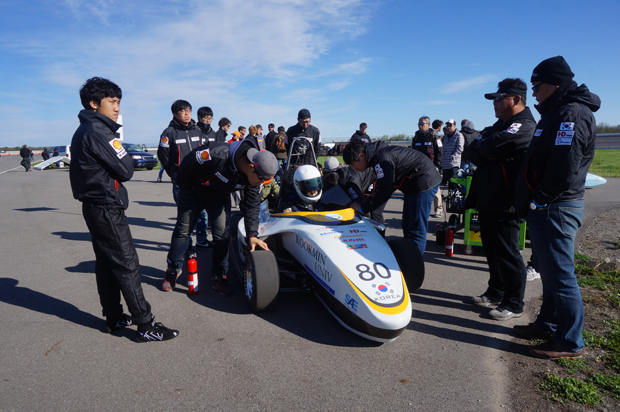 The racing team of the Department of Automotive Engineering in Kookmin University (President Ji-soo Yoo) took 18 ranks in Formula SAE (FSAE) that was hosted by the Society of Automotive Engineers (SAE) and was held in Michigan International Speedway, U.S. from May 13th to 18th while securing the no. 1 rank among Asian countries. This event is the largest student-design racing competition and about 120 universities from 20 countries participated.

Since the first participation in the event in 2004, the racing team of the school has participated for 11 years and through this, it was ranked 13th in the world in 2007 and 10th in 2009 and 2010. The concept of the car for 2014 was full-air that is applied in world top teams and focus was made on the suspension system that basically decides the balance as well as durability of the car as it tries to complete the endurance race. Also through a simulation program ADAMS, the dynamic performance of the car was interpreted while focusing the capacity on the completion of endurance race based on the car’s rigidity. In doing so, it resulted in a favorable achievement regardless of poor climate situation like below zero temperatures and hails. With only 1 point separating it from the no. 1 team, it ranked no. 2 in the Cost category that assessed the economic production of a vehicle. Although the challenging spirit to apply a new and better system entails more risks compared to producing a vehicle with the same system as the previous one, the challenge of the students served as a momentum to leap a step higher.

Professor Se-rin Eom (School of Communications), ranked no. 3 in the European Congress of Peri…