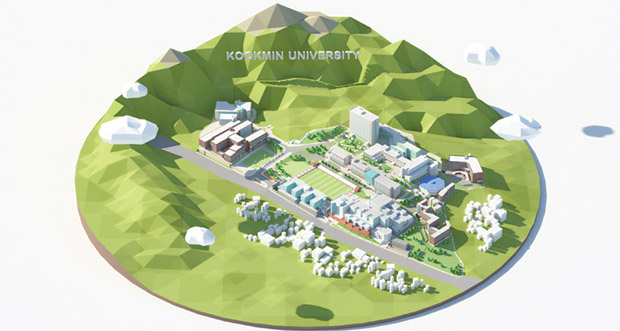 These days, virtual reality’s (VR) popularity is rapidly growing among students who are curious and want to experience the technolo-gy. Now you can experience VR on Bukak Hall’ s first floor. The technology was installed as periscope shape (kiosk) for six months with systematic preparation, so individuals can experience a VR renditioning of a campus tour in high-definition (HD). The kiosk provides the opportunity to experience VR, an opportunity that is rare for students. The goal is to facilitate the development of VR content through a variety students and researchers, and to train skilled individuals capable of leading the VR industry.

Students can see the main facilities ─ the campus’ 19 buildings and its schoolyard ─ through KMU VR Campus, and the VR world has been rendered online just as the real world appears. Users can also experience walking around campus through both desktop and mobile equipment. A maximum of 100 people can access KMU VR Campus at the same time and the software allows users to distinguish one another. Users can also share images and videos while in the KMU VR Campus and produce content such as music or games.

VR is a key future technology that will lead the fourth industrial revolution, and its availability is only growing. It is largely because of this growth that the university built the KMU VR Campus for six months after a systematic research period. According to Prof. Kyeong

Hoon Lee (Boss of College of Architecture), who streamlined this work, VR is reminiscent of our own plane of existence, while also being an entirely new environment. He also said the KMU VR Campus was constructed as a familiar campus for students and that he plans to develop his VR research for active use, such as for class, presentation, debate, club and other activities.

Beginning in Bukak Hal, Kookmin University plans to actively familiarize itself with VR for every area of study in order to establish a series of classes, including courses related to majors, in VR format.

It is a little hard to handle at first, but it is a new and amazing experience!