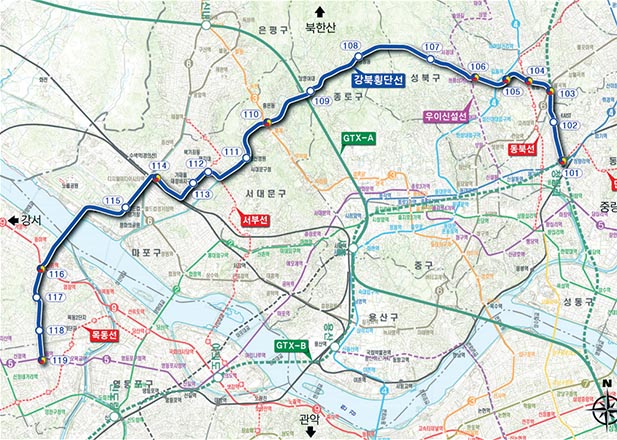 Gangbuk LRT ─ or the metro such as it operates north of the Han River in Seoul ─ will be open through 2028. This line passes through Gangbuk District from east to west, or from Mok-dong to Cheongnyangni. It is the main facilitator of balanced development between Gangnam and Gangbuk, and will impact Kookmin University students since the urban railway will pass through our school. The Seoul Metropolitan Government announced that it chose 10 subway lines that will be expanded until 2018 to guarantee districts’ balanced development.

Gangbuk LRT, which passes through Kookmin University, is a strategic subway line that propels balanced development between Gangnam and Gagbuk, and is a large-scale plan that will cost more than 2 trillion won ($1.76 billion). The project will improve public transportation and the balanced development of districts by increasing railroad service for the southwest, northwest, and northeast districts that are currently contain Seoul’s weakest urban railroads.

From Cheongnyangni to Gireum, Jeongneung, Pyeongchang-dong, Sangmyeo-ng University, Seodaemun-gu Office, Digital media city, World Cup Stadium station, and Mok-dong, there is a total of 19 stations that stretch 25.72 kilometers. Transfer will be available at nine stations, including Cheongnyangni, Wolgok, Mok-dong, Kookmin University, and Hongjae. The expansion of Ui-Sinseol LRT, which goes through Jeongneung Station (Kookmin University) is planned from Solbat Park Station to Banghak Station, and goes through high density houses such as Banghak-dong and Ssangmun-dong.

Gangbuk LRT connects northern Seoul, which proved difficult for the railroad for a while. The Seoul Metropolitan Government will offer railroad service to residents who were alienated from Gangbuk’s development and railroad traffic. When Gangbuk LRT opens, it is anticipated that 21 million people will use it. The project will also ease commuters’ trips to and from school with the opening of the Ui-Sinseol LRT, Jeongneung Station (Kookmin University). Yet neither the commencement date nor the completion date have been decided.