Kookmin University, conferred an honorary doctorate to Ozawa Ichiro, the representative of the People’s Life Party 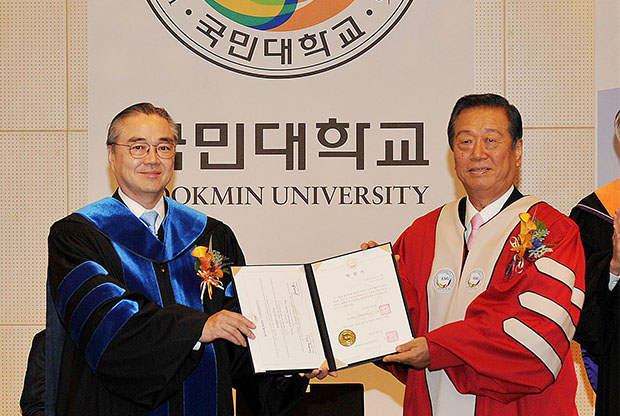 Kookmin University (President Ji-soo Yu) conferred an honorary doctorate in political science to Ozawa Ichiro, the representative of the People’s Life Party in Japan, in the Academic Conference Hall in the Administration Hall at 3:15p.m. on September 4th (Thur.).  President Yu of Kookmin University said, “As a current political leader that represents the postwar of Japan, Mr. Ichiro showed exceptional contribution for the construction, maintenance and development of the amicable relationship between Korea and Japan and in recognition of his outstanding contribution for the development of the School of International & Area Studies and Institute of Japanese Studies in Kookmin University, we confer an honorary doctorate in political science to Mr. Ichiro” and added, “This event was planned in accordance with a good cause to improve Korea-Japan relations from the national level.”

Through the speech made after the conferment of degree, Mr. Ozawa revealed, “It became an opportunity for me to look back at my career as a politician” and added, “As a politician and citizen of Japan, I will exert efforts to cooperate and support the amicable relationship of the people from both countries while promoting people’s happiness and development.”

Since the 1980s, representative Ozawa is a central figure in Japanese politics and has been known as the designer of the political reformation in Japan. He gave birth to the Democratic Party of Japan by putting an end to the long-term seizure of the Liberal Democratic Party in the election of 2009. He not only made great contributions to the innovation and development of the Japanese Parliament and party politics but also wrote numerous books on Japanese politics while actively engaging in political activities.

Prior to this, he visited Korea to have a meeting with former President Myung-bak Lee and had a special lecture in Kookmin University as a secretary-general of the ruling Democratic Party in November 2009. In consideration of his style that is reluctant to show up in a public lecture, his lecture in Kookmin University was found to be intriguing, drawing attention from about 100 mass media agencies from Japan. As a consequence, this event was extensively known in and out of Japan and has become an opportunity to introduce Kookmin University as well as the Institute of Japanese Studies to Japan. In this lecture, representative Ozawa expressed deep regrets over the Japanese ruling on the Korean Peninsula while announcing his prospective attitude on the political rights of Korean-Japanese. Such was highly evaluated as a great contribution for the amicable relationship and future-oriented development between Korea and Japan.

Opened the Sungkok Global Center in National University of Mongolia