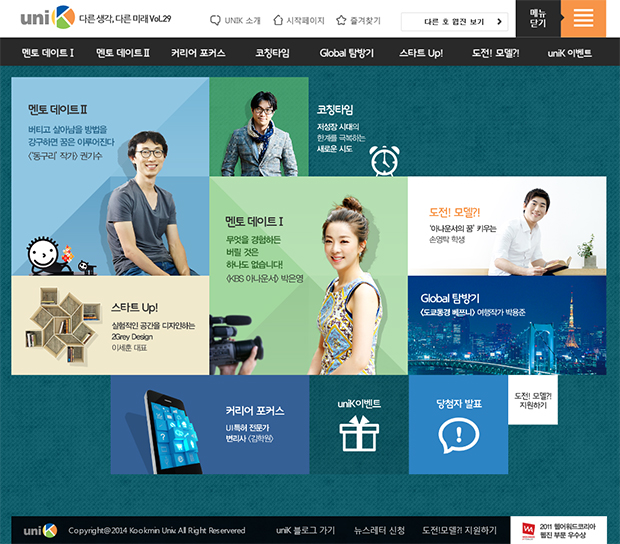 Kookmin University’s web-magazine, or webzine by the name of “UniK” was nominated for a Silver Award at the 11th “International Business Awards” (IBA). At the event, estimated works of 3,500 authors were submitted from about 60 countries and Kookmin University's “Unik" was the only Korean university entry that received an IBA award through its excellence in the “Website Management” and “Advertisement Marketing PR” categories. The International Business Award (IBA) is a premium international competition where businesses and organizations worldwide submit business activities that display their businesses, with their growth and marketing skills, to be evaluated. According to the business world, this award is considered as the “Oscar” award, and was presented at this year’s award ceremony held on October 10, 2014 in Paris, France. “UniK” focuses on the concept of a life planning and career choice mentoring program, which provides 8 editions a year for those who need them. It is mostly targeted for audiences in their 20s, and every edition tries to contain updated information and content about mentor’s interview records, studying abroad, employment etc. Moreover, in 2011 UniK received an award for excellence in webzine management at “Award Korea” held by Korea’s Internet Professional’s Association, known as the “KIPFA”. Many people, especially university students, seem to understand a webzine as merely a system containing in-campus stories, so they don’t show interest in reading it. It is rather, a great web-magazine that contains much varied content, which is explicit useful information for planning out our futures and tips to have successful lives. Also, besides the useful contents, UniK is well known for having such a beautiful trendy design for its webzine. Through this article, we hope to notice a drastic increase in the number of readers among the targeted audience.