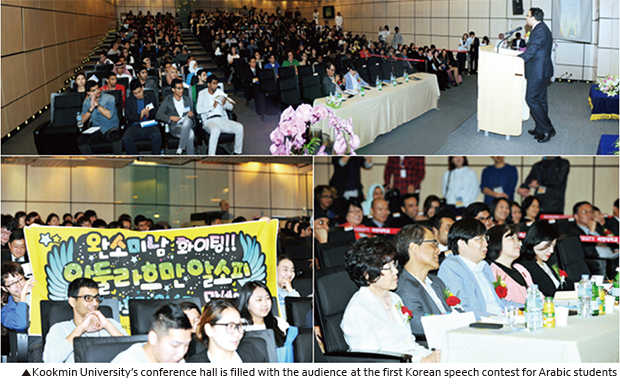 The first Korean speech contest for students from Arabic countries was held on April 23rd at Kookmin University. The contest, hosted by the Saudi Arabia Culture Center, selected Kookmin University as the host and sponsor of the competition among many other places this year.
One of the school missions for Kookmin University is to educate its students to serve not only the nation but the global community, and KMU is well known for its great effort in the promotion of cultural exchanges. Kookmin University has established sisterhood relationship with 244 universities from 41 different countries. Out of many international students attending Kookmin University, there are currently 66 Arabic students in various programs, and that number makes Kookmin University having the most number of Arabic students among Korean universities. The large presence of Arabic students contributed to the selection of Kookmin University as the host of this year’s competition.
The contest, which will be held annually starting from this year, aims for several goals. Its primary goal is to achieve harmony among many students from Arabic countries and it also hopes that it can provide a great opportunity for students to improve their Korean language skills. Additionally, as students give speeches and share their unique stories of living in Korea or their views on Korean young men, a higher degree of understanding between Arabic culture and Korean culture can be achieved and that is another important goal.
The panel of the judges consisted of several professors including the chief of Seoul National University’s Language Education Institute. The Ambassador of Saudi Arabia to Korea and the head of the Saudi Arabia Culture Center graced the occasion with their presence at the contest.
The contest was divided into the preliminary round and the final round. In the preliminary round, there were 55 students from 22 different Arabic countries. From them, 16 qualifiers were selected and progressed to the final round and they were given the opportunities to deliver speeches at Kookmin University’s conference hall.
The atmosphere at the final round was electric with excitement and cheers. Despite the conference hall’s seating capacity of 250 people, additional chairs were needed to accommodate the large audience. Out of the 16 students who delivered their speeches at the final round, 14 students came from different universities and 2 students, Mujtaba and Eyad, came from Kookmin University. The 16 students were from 6 different Arabic countries.
Although some students were not fluent in their speeches, many of the speeches were really entertaining and meaningful. Considering the difficulty of foreigners to learn the Korean language, there were several outstanding speeches. The students delivered their speeches eloquently and even tried to introduce some of the Korean cultures to the audience at the same time. For instance, Majed who is a student at Inha University’s Korean Language Institute talked about “Jeong”, the feeling of warm relationship which is unique culture only in Korea.
Another student, Khalid, a student from Kyunghee University Korean Language Institute, talked about Confucian saying, “A boy and a girl should not sit together after they have reached the age of seven.” Although Koreans used to share such an attitude in the past, it is rather different and contrary to Korea’s current attitude. Khalid received the grand prize and the award of one million won for entertainingly delivering the speech about the difference between the old saying and the current attitude of Koreans.
Kookmin University, with its greatest number of Arabic students among Korean universities, is expecting many students to participate actively in the contest. Although this year, only one student, Mujtaba from Kookmin University received a participation prize, with more preparation and participation, Kookmin University is hoping that more students can win a higher prize next year.