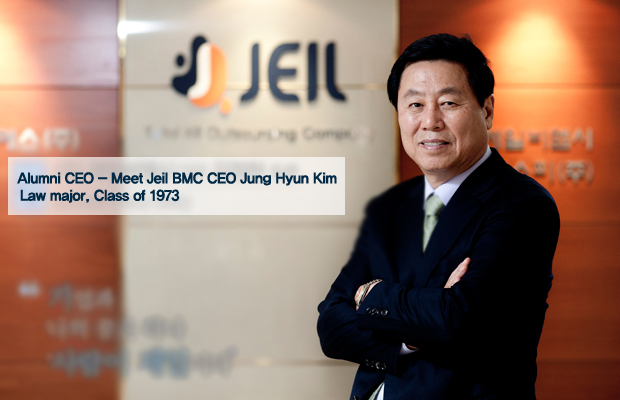 Alumni CEO - Meet Jeil BMC CEO Jung Hyun Kim / Law major, Class of 1973
There is an alumnus who founded Jeil BMC in 2010, a workplace that serves as a model to the employment of the disabled. He is Jung Hyun Kim, a graduate of the law class of 1973. His efforts in social contribution have been recognized, and last November at the 67th anniversary of the founding of Kookmin University, he was awarded the Alumni Service Award. We met with Jung Hyun Kim, who is steadfastly walking his path of 'people first.'

Despite having agreed on a date and a time for the interview, it was hard to meet this alumnus. After twenty minutes of waiting, I finally got to sit down with him face to face. He apologized, saying there was an urgent matter that needed his approval. But five minutes into the interview, he received another call saying he needed to rush out to participate in another event. It was just how I imagined the leader of 4 different businesses would be. After such efforts, we were barely able to complete the interview. The endless sounds of the camera shutter sounded like a knife slashing down on the limited time we had. And yet, our conversation was sincere and I could smell the scent of the aromatic green tea.

Jung Hyun Kim was born in the small town of Andong. He went to a small elementary school, which only had one class per grade. He was a model student, and grew up with many expectations. He enrolled in a middle school within Andong City, where he ranked first or second place in the entire school - throughout middle school and high school. His first hardship came when he failed to get accepted to his desired university. He had wanted to enroll in the leading university at the time, but was unable to do so.

Even after enrolling as a law major at Kookmin university, he did not come to terms with reality. He experienced a short period of disarray. Though a law major, he did not think of taking the bar exam. At the time, only a handful of people passed the exam, and those were the people who dedicated 2 or 3 years to their studies in a quiet temple away from the city. He was also young, and had a slightly rebellious attitude, where studying was not the most important goal in his life. He believed graduating from college and working at a good corporation was also worthwhile.

The turning point came when he became a member of 'Cheongmoonhoe,' a semi-academic social club. The students gathered together to discuss social issues, philosophy, and other current events. At times, the club would borrow a separate hall to host academic debates. He was able to escape from the hardships of reality and express his youthful spirit through club activities. At the time, all members of the club offered support for each other. That was where he was able to develop fondness for the school and focus on his courses. After completing his military service, he worked hard to make up for failed courses and worked as a tutor while attending all club activities. In no time, he was in the graduating class.

When asked which experience shaped him, he pinpointed the Cheongmoon club activities. "At the time, what offered me the greatest support was my club members who acted as mentors and who looked up to me. We still continue that friendship, which is proving useful these days as I run my own business and perform numerous social activities. I heard that Cheongmoon is still in existence, while numerous other clubs have formed and dissolved."

For the disabled, their job is a weapon that allows them to survive

Upon graduating, Jung Hyun Kim worked in real estate affairs at Samsung Life Insurance and Samsung Fire & Marine Insurance's asset management division for 18 years. He worked with no regret, because he wanted to be recognized above those who graduated from top grade universities. Based on these experiences, he founded Jeil BMC in 1998. It is a human resource outsourcing company that hires people and dispatches them to other companies. It grew larger and expanded to include Jeil BS, Jeil SP, and Jeil Together - which put Kim at the helm of 4 corporations.

Among these, Jeil Together was the sixteenth workplace for the disabled, which hires people who are intellectually challenged and offers them jobs. I was curious how he first got interested in the disabled. "I have a friend who works at an association for the disabled. He is a renowned professor who works for the rights of the disabled. As a businessman, I was initially not interested, but was asked to participate as an executive on the board. In my case, I went into the field with little thought, and was deeply touched afterwards."

Kim signed an MOU with the Korea Employment Agency for the Disabled and founded Jeil Together, Inc. At present, there are 28 intellectually challenged people working for him. They usually specialize in simple manufacturing such as assembly and packaging of electronic parts. Because of their handicaps, they have lower productivity. To maintain profits while paying the legal minimum wages can be challenging. Even with the help of the agency, the initial phases of the corporation were riddled with hardships. And yet, his determination remained steadfast.

"The disabled also need jobs to feel responsibility toward their lives. Handing out financial assistance and other temporary benefits do not help them at all."
As time passed, the workers started to gain speed, and as their experience developed, sales started to catch up. Kim's new goal is to allow the disabled to accomplish more complex tasks, so that they would be able to survive as technicians. To this end, he is working to assemble a diverse range of employment opportunities.

In 2010, he participated in the world soccer competition for the disabled in South Africa as the head of the team. The players all had mature bodies, but their words and actions were as lovable as those of elementary school students. He spent 25 days together from dawn until night, eating and sleeping together, while watching their matches with players from other countries. It was an opportunity for him to truly bridge the gap.

If I return to campus, I would love to go join other clubs
From the beginning years of his business, Kim has believed that 'people comes first.' I asked about his difficulties, especially in keeping both the corporate ideologies and his personal goals.

"When you run your own business, there are times when you do feel regret. That sense of bitterness is especially true when you need to yield to power. At times, it becomes hard to bear. However, I have no intention of changing my corporate ideology. When deciding on promotion and wages, our company has one principle- not to discriminate on the basis of gender, marital status, and educational background. We don't offer more because the employee is a male from a great university. More than anything, I don't hold any bias on education - and our current employees range from community college graduates to university graduates. Three of my employees are alumni of Kookmin University, and they all work as professionals in their respective fields. I believe a society that evaluates people based on their performance is the way to creating a people-oriented society.

While wrapping up, I asked a slightly frivolous question. "If you were able to go back in time to when you were 22, what would you do?" I asked. "I want to learn how to play. In my days, we were all too busy earning a living and even when we wanted to do something, we couldn't. The school halls were empty and the library did not have enough books. If I were to return to campus, I would like to join other club activities - not the academic types but ones that teach you how to play. Even now, I am unable to sing or dance because I get shy. I think most people my age go through the same thing. Maybe I would join a guitar club or some sports club that would allow me to fully immerse myself in the romance of youth.

It was an honest answer that had a scent of regret. He also added a piece of advice for future graduates.
"These days, schools offer various cultural events and infrastructure - so I want all students to take advantage of these to the fullest. Finding a job is not everything. The employment rate of graduates is an important indicator used for university evaluations, but more than anything, I hope the students can spend more time in finding out about themselves."

I was curious how Kim came across to his employees, and asked Min Seok Kang (Kookmin University Accounting major) who works in sales. "He is very meticulous, and always works toward perfection. He has unusual determination and drive, and I look up to him as an alumnus and as my boss."
After 40 minutes of interview, Kim had to rush off to other engagements that he had postponed for the interview. People come first - but putting this obvious phrase into practice may be harder than we think. That was the thought that fleetingly crossed my mind as I watched Kim rush off.